And Just How Well Is That Working For You? 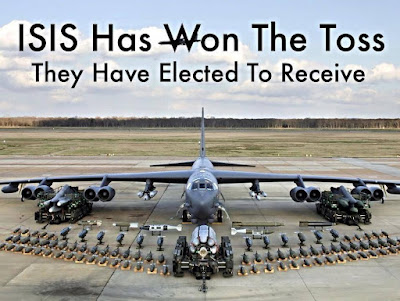 The United States Air Force is running low on stuff to toss at Islamic State targets in Iraq and Syria. To date the USAF says it has 'delivered' (you know, like Amazon) some 22,000 bombs and missiles in its campaign, going through the stuff "faster than we can replenish them."

Now that's just the US air force. The American navy and marines have their own records. And it doesn't include America's coalition - Australia, France, Britain, ex-Canada and the three or four bombs dropped in the sand by the Saudis and their Gulf State allies.

In 2014, American estimates put the overall strength of ISIS forces at 20-31,500. I guess some of them would just have to share a bomb.

That, however, may be wishful thinking. Senior Kurdish leaders says that, while we've been earnestly bombing Islamic State forces their numbers have increased perhaps upwards of 200,000.


Proof that Isis has created a large field army at great speed is that it has been launching attacks against the Kurds in northern Iraq and the Iraqi army close to Baghdad at the same time as it is fighting in Syria. "They are fighting in Kobani," said Mr Hussein. "In Kurdistan last month they were attacking in seven different places as well as in Ramadi [capital of Anbar province west of Baghdad] and Jalawla [an Arab-Kurdish town close to Iranian border]. It is impossible to talk of 20,000 men or so."

The high figure for Isis's combat strength is important because it underlines how difficult it will be eliminate Isis even with US air strikes. In September, the CIA produced an estimate of Isis numbers which calculated that the movement had between 20,000 and 31,500 fighters. The underestimate of the size of the force that Isis can deploy may explain why the US and other foreign governments have been repeatedly caught by surprise over the past five months as IS inflicted successive defeats on the Iraqi army, Syrian army, Syrian rebels and Kurdish peshmerga.

Where is John "Bomber" McCain now that we need him to tell these ISIS guys that we've got them whipped?
Posted by The Mound of Sound at 10:04 AM

Do not buy argument of self declared impotence of USA. Desert is not a jungle... For the past few years Yanks played a dangerous game of using daesh to foster their and their allies regional interests. Example: When Vlad admonished US that somehow they are not going after daesh with a full resolve, puff, and 119 tankers are gone in a single day, courtesy of USAF.
A..non