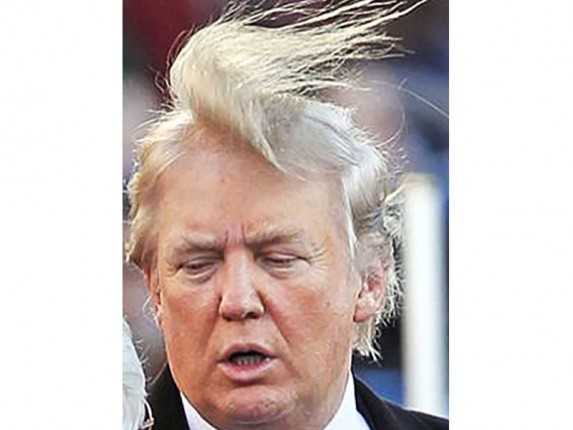 His mother was a Gaelic-speaking lass from Stornoway on the Isle of Lewis but that hasn't endeared the Mouth that Roared, Donald Trump, with the Scottish people or their governments.

America's Bellicose Blowhard-in-Chief has popped a fuse over losing an appeal over the Scottish government's decision to allow an offshore wind farm near Trump's luxury Scottish golf resort facility. Trump reckons those whirly-gigs will fuck up the view.

Lawyers for Mr Trump, whose call last week to deny Muslims entry to the United States provoked widespread criticism in Britain, had argued at the UK's top court that the Scottish government's decision to approve the scheme was flawed.

It was the giant orange muff's third and final attempt to fight the wind farm in court. He reacted to his third consecutive loss by denouncing the Scottish government in a statement as "foolish, parochial and small-minded."

The photo above made me think of Mr. Burns from The Simpsons.

Wouldn't it be great if the producers did a segment in which Burns gets a Donald Trump combover/pompadour?
Posted by The Mound of Sound at 8:31 AM

That would be Turnberry, a course and hotel originally built in 1902 and '06.

One of the great links courses in fact.

The R&A cancelled that booking and told the world why as well.

Mound, there is no question that Trump is a crazy jackass. It is amazing that American Public are not getting it. He still polls at the top.

I posted this photo because it's one of the few that reveals Trump's seriously receding hairline. It's somewhere back around his ears. I think if voters saw him without his elaborate combover/pompadour his support would plummet. Too bad someone doesn't douse him with a bucket of water.

Anyong said....a little off topic but today I heard a little something that has me thinking. It was said that Donald Trump is very good friends with the Clintons. Is this Trump thing a way to get Hillary into the White House? If it isn't, does this mean Mr. Trump would like war with ISIS? If so, it isn't difficult to imagine ISIS rubbing their hands.