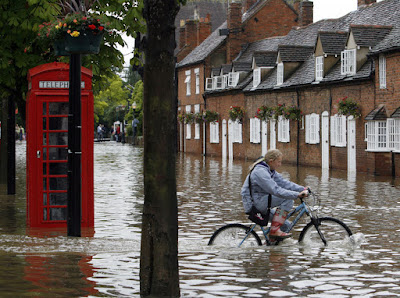 It's not a rhetorical question. It's also a question that's going to come up more and more as our planet's climate worsens. Consider this year's El Nino a glimpse into tomorrow's "normal."

At the moment the question could be posed to a number of governments, Australia's and Britain's come to mind. They're charter members in good standing of the Anglosphere which means they've had their fair share of neoliberal government, disciples of free market fundamentalism.

Australia's governing party staged a coup to rid the country of its Harper clone, Tony Abbott, but beyond now more or less admitting climate change is real, sort of, the country is still immersed in the old ways. Did I mention it's also ablaze? Well the parts that aren't flooded are afire. At least the Brits don't have to contend with saltwater crocs swimming down their lanes. Call it Karma Down Under where the supposedly climate-conscious government just approved a massive new coal operation.

Fire isn't the problem on the other side of the world in merry olde England. That country is ruled by market fundamentalist Tory, David Cameron, a man who walks the stained path of Margaret Thatcher, who packs austerity in both holsters.

Cameron's problem is that he hasn't figured out that what Britons used to know as winter has now become flood season. Apparently he was so busy cutting benefits to the vulnerable that he didn't read the memo about this year's raunchy El Nino.

Three cities; Leeds, Manchester and York; have now been inundated with feet of flood waters, the result of torrential rains. Just as their floodwaters seem to have crested, Britain's Met Office is warning of another bout of heavy rains and gale-force winds by mid-week.

David Cameron, ever the market-fundamentalist technocrat, sees the problem as a question of spending.

"I think with any of these events we have to look at what we are planning to spend and think: ‘Do we need to do more?’ " C'mon, Dave. Do you need to do more? Do you really need to ask? Of course - austerity - sorry.

Meanwhile an official of the Environment Agency suggests that Britons henceforth 'waterproof' their houses. David Rooke says those in flood affected areas will need solid floors, waterproof plaster and their household wiring relocated higher up the walls.

That, friends, is what you get when the new climate comes calling and your government's asleep. Here's what you need to ask yourself. Is your government any better than Cameron's or Australia's or America's?

Neoliberals may think they can ignore climate change or that, somehow, they can outwait it. They can't.