A Third of our Arable Land Lost in Just the Past 40-Years. 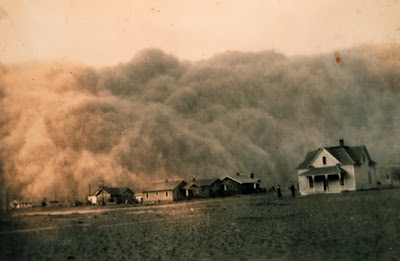 It's that old saying about how "life is just one goddamned thing after another."

I really hope we work something out at the Paris climate summit but I'm not sure it's going to matter much to a great many people over the next thirty or forty years. That's because, like a malignancy, we're consuming the very Earth that sustains us and all life.

This year mankind set another record, consuming the Earth's renewable resources at 1.7 times their natural replenishment rate. We're digging into our planet's resource reserves, our "seed corn", at increasingly rapacious rates. Not only that but we have become absolutely dependent on wildly excessive levels of consumption. It's a game that cannot end well.

So, what is it today? Word is that Earth - actually, that would be mankind - has lost a full third of our arable land over the past forty years.

The world has lost a third of its arable land due to erosion or pollution in the past 40 years, with potentially disastrous consequences as global demand for food soars, scientists have warned.

New research has calculated that nearly 33% of the world’s adequate or high-quality food-producing land has been lost at a rate that far outstrips the pace of natural processes to replace diminished soil.

The University of Sheffield’s Grantham Centre for Sustainable Futures, which undertook the study by analysing various pieces of research published over the past decade, said the loss was “catastrophic” and the trend close to being irretrievable without major changes to agricultural practices.

This should come as no surprise. It merely follows several reports, including one last year from the UN Food and Agriculture Organization, warning that we're exhausting the planet's farmland at a rate that could render almost all of it unusable within 60-years.

Generating three centimeters of top soil takes 1,000 years, and if current rates of degradation continue all of the world's top soil could be gone within 60 years, a senior UN official said on Friday.

About a third of the world's soil has already been degraded, Maria-Helena Semedo of the Food and Agriculture Organization (FAO) told a forum marking World Soil Day.

The causes of soil destruction include chemical-heavy farming techniques, deforestation which increases erosion, and global warming. The earth under our feet is too often ignored by policymakers, experts said.

This is a nightmare unfolding before our eyes, one that everyone is polite enough not to discuss. Well, not quite everyone. Sorry.

You see, here's the thing. Climate change, the loss of biodiversity, the loss of terrestrial and marine life, the depletion and degradation of our natural resources. and so much more - they're all linked, interwoven. These are existential crises. It doesn't do much good to sort out one only to succumb to all the others. You have to solve them all if you're to have much hope of solving any of them.

If you want mankind (and other life forms) to survive these dangers you have to want them fixed, all of them. Each and every one, the lot. Fortunately there are rational solutions that could still work but that's a window that's closing. It would take nothing less than to abandon 18th century economics, 19th century industrialism and 20th century geopolitics - the modes of organization that have, over the past 30 years, lost their utility and now threaten our survival instead.

The life raft is called "steady state economics" which is more than I can go into in a blog post. The Wiki entry should give you a fair idea of what it is and how it operates. Even Adam Smith, The Wealth of Nations (1776), foresaw the end of growth back in his day. There are many fine books on the subject by Herman Daly, Thomas Prugh, Robert Costanza, Richard Norgaard, Paul Craig Roberts and many others if you want to look into it at greater depth.

SPRAWL is easily one of the greatest culprits behind this shocking change:
- farmland bulldozed for houses
- more cars clogging highways (that again absorb valuable farm land)
- cutting, digging, drilling, mining and hauling from pristine forests and once-wild areas to give us all of the latest trinkets and baubles

It's time for ALL of us to learn how to live a little closer with less space and fewer demands on our planets.

Failure to do so will result in our failure.

Mound, polluter lobby is much more powerfull than lobby for climate change. Another hurdle is that predominant percentage of public in Asian and African countries have no idea as to what climate change is. And their leaders are making sure that public does not get informed about climate change catastrophy.

Indian leaders refuse to co-operate and India is one of the biggest polluter and so is China.

@ Anon. No argument with any of that. You point out that we know what we must do but show no inclination to act.

It is vexing, LD. We have this problem with China and India that's based on them claiming the moral high ground because their per capita emissions are well below the West's. That lets them off the hook for quadrupling their populations since the end of WWII. Neither of them wants that included in the conversation.

David Suzuki has 5 children while Al Gore has 4.
"Neither of them wants that included in the conversation." @ climate change ;-(
A..non

A..non, you constantly amaze me. Sometimes you come up with very cogent points, truly thoughtful stuff. Then you lapse into these innerweb talking points.

Of course how am I to know if there is more than one person posting comments as A..non.