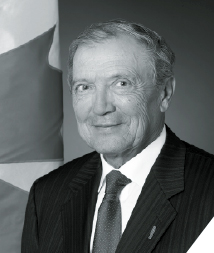 There'll be blood on the floor of an Ottawa courtroom before this day is over.

Senator Mike Duffy has opened fire on the senior Tory Senate leadership who ruled the roost during the heyday of the Harper regime. He began with veteran senator Dave Tkachuk:

“He was a senior member of the leadership of the Conservative caucus in the senate, he was deputy chair of the Senate committee on budgets and internal economy,” Duffy said, under questioning from his own lawyer, Donald Bayne. “He was the No. 2 man on the committee that ran the business of the Senate … and our guru on all things related to Senate operations.”

The longtime Ontario resident’s appointment as a P.E.I. senator was instantly challenged by political opponents, including a prominent Island legal expert, and Tkachuk told him claiming the housing allowance was important for shutting those opponents down.

“The housing allowance is to defray part of the cost of your second home. There’s no reason for you to be penalized, no parliamentarian, for having two homes,” Tkachuk said, according to Duffy’s testimony. “It’s very important that you claim all the claims and allowances. Because if you don’t, if you create any light between you and any other senator who’s on travel status while in Ottawa, but most particularly any Prince Edward Island senator, then the professor will come back and say, ‘See, he’s different, he’s not an Islander.’”

Duffy himself didn’t believe he should claim “per-diems” for meals he ate in his own home, he testified. “(Tkachuk) said you’ve got to claim them. Because not to do so could create controversy around whether you’re truly a Prince Edward Island senator … You must do this.”

Tkachuk also told him that whenever he travelled to boost the Conservative party profile, he was doing Senate work and should charge his expenses to the Senate, Duffy testified. Such claims are part of another set of charges Duffy faces.

Tkachuk's political career began as principal secretary to premier Grant Devine who led the most corrupt government in Saskatchewan history.

I have no doubt that Duffy is describing standard operating procedure of the Senate. Harper didn't start the corruption but he made it worse.

I am looking forward to the test run of the new system.
Five new Senators for Christmas!
Appoint Hugh Segal as chair of the search committee.