One Argument for Bringing Back "la Terreur" 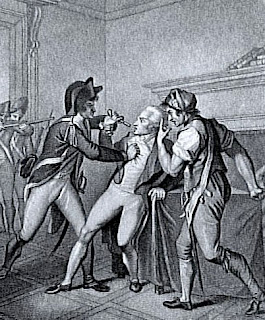 I never used to have fond thoughts of the Reign of Terror, those days in 1784 when radical revolutionaries escorted more than 16,000 of their French betters to the 'National Razor', the guillotine. I'm still sure that was awful only not quite so sure as I used to be.

A piece in today's New York Times explores what it describes as a "private tax system" that saves America's richest of the rich billions on their tax bills every year.

The article points out that the tax burden on the wealthiest has fallen from 27% during the Clinton years to 17% during Obama's tenure and, if Congressional Republicans have their way, it may soon be whittled down to just 10%.

So much for democracy.
Posted by The Mound of Sound at 10:25 AM

Are you referring to the 'chipper scene' from Fargo?

Haha! I'd forgotten that. Close but a processor has a great big chainsaw. Very modern, don't you know, and noisy.

Thanks for the link, Chris, although I wish I'd seen that clip when the kids were asking what I wanted for Christmas. To a guy like me that looks like hours of fun.

I do about 6 cord a year with a chain saw and an axe. The older and more arthritic I get the better the machines look. Like heat pumps...