Oh, There IS a Santa!! And He Showed Up a Week Early! 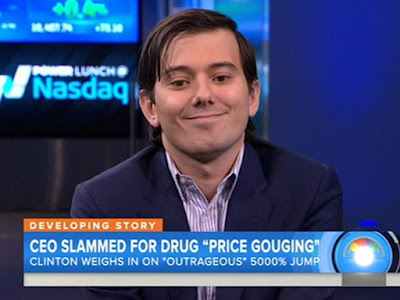 You might remember this smug prick, Martin Shkreli. He's the Grinch whose claim to fame rests with pharmaceutical price-gouging. Well the FBI wiped a whole lot of that smug off Martin's face when agents showed up with their own Christmas gift - an arrest warrant.


Shkreli, 32, sparked national outrage in the US earlier this year after his pharmaceutical company, Turing Pharmaceuticals Inc, hiked the price of the drug Daraprim, a common anti-parasitic drug, to $750 a tablet from $13.50 immediately after acquiring it. Shkreli staunchly defended his decision, responding "lol" to Hillary Clinton on Twitter after she criticized him.

Shkreli's arrest Thursday comes after a fraud investigation stemming from his time as manager of hedge fund MSMB Capital Management and CEO of biopharmaceutical company Retrophin Inc, a person familiar with the matter said.

Reuters witnessed law enforcement agents arresting a hoodie-clad Shkreli at the Murray Hill Tower Apartments and escorting him into a car in midtown Manhattan today. A spokesperson for the FBI confirmed Shkreli's arrest.

Shrekli is expected to be charged today for illegally using assets from Retrophin to pay off debts after his hedge fund lost millions of dollars, the source said.

In addition to angering pharmaceutical executives and consumers alike, Shkreli has also managed to piss off hip-hop fans too. He recently bought the sole copy of Wu-Tang Clan's latest album, Once Upon A Time In Shaolin, for $2 million after the rap group agreed to sell it to the highest bidder. He then threatened to destroy the CD.

Oooh, Martin, I so hope they find that one very special little jail cell for you. It's almost got your name all over it.
Posted by The Mound of Sound at 7:48 AM

a few more bastards like him need to go to jail as well.