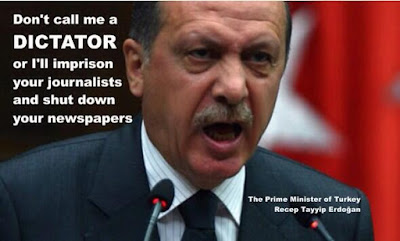 Turkish president Recep Erdogan seems to be a bit of a dirtbag. He's been in and out of the public eye over Turkey's 'tolerant' policies toward ISIS in Syria and the terrorist group's lifeline, oil from fields seized from Iraq and Syria.

And then Vlad Putin showed up. It began at the G20 when Putin claimed to have a dossier of 40-countries that were supporting the Islamic State, some of which he said were in the ranks of the G20. Putin specifically pointed out ISIS tanker truck convoys laden with oil crossing the border into Turkey.

With that, the coalition air campaign, which had been moaning about a lack of suitable ISIS targets, discovered the target rich Syrian border with Turkey. American jets rained destruction on at least one massive tanker truck convoy. Russia is said to have taken out others.

Then came the magical, 17-second air intercept when Turkish F-16s shot down a Russian Su-24 bomber that was briefly transiting their airspace. As facts emerged showing that the Turks had ambushed the Russian warplane, Erdogan got all huffy about the inviolability of Turkish airspace. NATO dutifully backed Turkey.

Then it emerged that Turkey routinely transgresses its neighbours' airspace - Syria, Iraq, Israel and especially Greece and conducts unauthorized bombing missions against Kurds in northern Iraq. Erdogan was even on record saying, several months before the Russian shootdown, that no nation had a right to shoot down another's aircraft for a harmless intrusion into its airspace. No nation except Turkey, it seems.

Now Moscow is directly accusing Erdogan and his family of being in league with ISIS.

“Turkey is the main consumer of the oil stolen from its rightful owners, Syria and Iraq. According to information we’ve received, the senior political leadership of the country - President Erdogan and his family - are involved in this criminal business,” said Deputy Defence Minister Anatoly Antonov.

“Maybe I’m being too blunt, but one can only entrust control over this thieving business to one’s closest associates.”

“In the West, no one has asked questions about the fact that the Turkish president’s son heads one of the biggest energy companies, or that his son-in-law has been appointed energy minister. What a marvellous family business!”

Well the Russkies do seem to raise a prima facie case. The Erdogan family is in the oil business. President Erdogan has appointed his son-in-law Turkey's energy minister. Someone with some pretty high level authority has been allowing ISIS oil tanker convoys to cross the border into Turkey and that someone may be related to the someone who, until NATO cracked down, allowed ISIS recruits free passage across Turkey into Syria.

NATO, of course, doesn't have much choice but to close ranks around Erdogan. The integrity of the alliance is at stake. We do have to deter Putin from getting his own back at Erdogan - at least for a decent interval. Later, well...

Alison from Creekside kindly sent along this clip of tankers crossing at the Turkish border.

A question: If I were a Syrian, fighting on either side, would I allow the theft of my country's future, for the benefit of others. By the way you left out Israel as being one of those benefiting from that theft.

@ Alison. Thanks for the link. Funny how the West didn't think to bomb these convoys before Putin dropped it in their laps at the G20.

Anon. I don't get your point about Israel benefiting unless you mean it prefers the overall chaos of the Syrian fiasco.

Much of that winds up in Israel.

As ISIS oil is "co-mingled" with the Kurdish oil, whom ever buys that "Kurdish" oil, also buys ISIS oil.

Hi, Jay. thanks for that clarification.