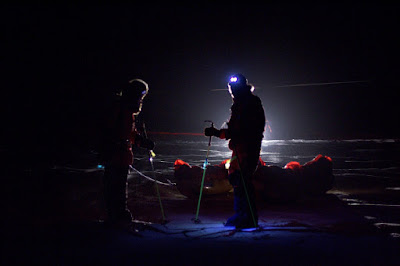 The original predictions were alarming and they were also wrong. A few days ago it was predicted that the severe winter storm that swept through eastern Canada out of Texas would cross the Atlantic, picking up warmth and moisture, bring more floods to Britain and then barrel on into the Arctic where it could finally warm the North Pole to nearly 0 degrees Celsius.

Temperatures at the North Pole normally fluctuate at this time of year between -13C to -43C.

The updated predictions now call for high temperatures at the North Pole of almost  +4C. In Fahrenheit that's almost 40 degrees, pretty balmy for the top of the world in January.

The next question is what happens to all that newfound polar heat? Remember that first law of thermodynamics that holds that energy cannot be created or destroyed? That's a law, not a theory. And, when you boost the temperature from as low as -43C to a record busting +4C, you've introduced a massive amount of heat energy to the high Arctic.

There probably won't be much to see, given that the Pole is in total blackout now waiting for the dawn to return in March.