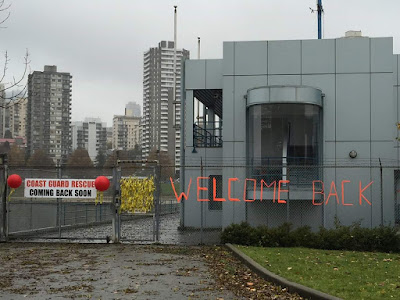 Canada's major west coast port and boaters' paradise will soon be again under the protection of the Canadian Coast Guard.

The federal government has announced that CCG Kitsilano will re-open as soon as possible.

"There was massive local outcry about the closure, given that we saw this base responding to over 300 calls each year," he said.

"It was a mistake that it was closed at all," said B.C. Premier Christy Clark. "So many people use this harbour, not just commercial shipping, so many citizens."

Robertson said the Kitsilano closure "made things worse" this past summer when close to 3,000 litres of bunker fuel leaked from the MV Marathassa into English Bay, soiling local beaches and sparking a two-week cleanup.

The oil spill happened a kilometre away from the closed Kitsilano station. Coast guard response from the nearest open base in Richmond was criticized as slow.

The station was closed in 2013 by the boneheaded diktat of Stephen Harper.
Posted by The Mound of Sound at 3:07 PM

I hope the Feds give the Coast Guard back to Nfld.

Seconded about the Newfoundland station.

Harper would wander about the Arctic for a few days each summer dressed like a gorf, preach long and hard about how he was going to defend it from something or other, blah blah, blah, blah, shake the hands of the Inuit Polar Rangers who unknowingly provided the background colour, and then spent a grand total of two dollars and thirty six cents on the region.

He then decided to spend even less in NL.

So, as he hated Premier Danny Williams for telling Canada what an untrustworthy person he was, he decided to let Newfs and Labradorians die on ice floes by closing the Coastguard station and throwing away the key.

And I'm from Nova Scotia with no frontline skin in the NL game. Our guys stationed from Shearwater and Greenwood had hours of flight time just to get on station to try and help. Harper was a dangerous man, hated everyone who didn't jump when ordered, could not abide criticism and knowingly got rid of an essential service. Basically said FU to anyone who wsn't an old stock Albertan.

Why Mound, you are so quiet regarding this subject.