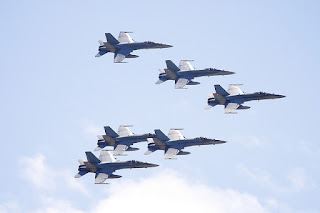 The Globe's Jeffrey Stevens criticizes prime minister Trudeau's decision to pull Canada's CF-18 sixpack out of America's aerial coalition bombing ISIS in Iraq and Syria. Stevens complaint is that our "allies will remember" what he contends is Canada's feckless abandonment of the collective cause.

Stevens, of course, doesn't know his ass from his elbow about the Kabuki theatre underway in the Syrian air war and, quite obviously, couldn't care less. Enter a guy who does know a good deal about these things, Gwynne Dyer.

Mr. Dyer points out that when it comes to Syria, NATO is being played for a sucker by Turkey's president, Recep Erdogan.

President Putin said bitterly that Erdogan and his colleagues were "accomplices of terrorists". That's hard to deny: Erdogan is so eager to see Syria's President Bashar al-Assad overthrown that he left the Turkish-Syrian border open for four years so that recruits and supplies could reach the Syrian rebel groups, notably including Islamic State (IS).

Putin also observed that "We have long been recording the movement of a large amount of oil and petroleum products to Turkey from IS-occupied territories. This explains the significant funding the terrorists are receiving."

Black-market oil is Islamic State's largest source of revenue, and almost all of it goes to Turkey - which could not happen without the Turkish government's active connivance. And when the Nusra Front, Al-Qaeda's affiliate in Syria, was driving Assad's forces back in northwestern Syria last spring, Turkey jammed the Syrian army's telecommunications to help the rebels win.

Erdogan is utterly determined that Assad must go, and he doesn't really care if Assad's successors are Islamist extremists. But he also wants to ensure that there is no new Kurdish state on Turkey's southern border.

That is a problem for him, because that state already exists in embryo. It is called Rojava, a territory that the Syrian Kurds have carved out in the far north of the country along the Turkish border, mainly by fighting Islamic State. Indeed, the Syrian Kurds are the US-led coalition's only effective ally on the ground against IS.

When Erdogan committed the Turkish air force to the Syrian war in July, he explained it to the United States as a decision to fight against Islamic State, but in fact Turkey has made only a token handful of strikes against IS. Almost all Erdogan's bombs have actually fallen on the Turkish Kurds of the PKK (who had been observing a ceasefire with the Turkish government for the past four years), and above all on the Syrian Kurds

Erdogan has two goals: to ensure the destruction of Assad's regime, and to prevent the creation of a new Kurdish state in Syria. He was making some progress on both objectives - and then along came the Russians in September and saved the Syrian army from defeat, at least for the moment.

Worse yet, Putin's strategy turns out to quite pragmatic, and even rather attractive to the United States despite all the ritual anti-Russian propaganda emitted by Washington. Putin wants a ceasefire in Syria that will leave everybody where they are now - except Islamic State, which they can all then concentrate on destroying.

This strategy is now making some headway in the Vienna ceasefire talks, but it is utterly abhorrent to Erdogan because it would leave Assad in power in Damascus, and give the Syrian Kurds time to consolidate their new state. How can he derail this Russian-led project?

Well, he could shoot down a Russian plane, and try to get a confrontation going between Russia and NATO.

If there was ever a time for NATO members to sit one out, this would be it.

CBC, this morning, ran a story that some Syrians in the camps are choosing to stay in hopes of returning. This would seem to indicate that they are OK with Assad remaining in power. It is the war they ran from not the Government.

Yes it is a muddy mess and trying to follow all of the participants and who they are supporting can get confusing. Do they really want to live under Assad or do they feel that is a better option than relocating half way around the world to a place they may not have heard of, unsure if it would be better than their present 'camp' situation.

John McCallum said the idea of them 'not wanting to come to Canada' is crazy citing how many are in Germany but, Canada is a lot farther away than Europe to their homelands.

I wouldn't want to move to a starnge place that far away if I didn't have to.....

When has Dyer ever been wrong? Never.

That is why he is not listened to by the powers that be.

@ Rumley. Isn't that always the way in these murderous civil wars? People from all sides can be put to flight. The anti-Assad folks from Aleppo aren't the only group getting slaughtered.

@ Anon 3:59. I'm sure there are a lot of Syrian refugees who don't support Assad yet look at what befell Iraq and Libya when their dictators were toppled and dread, even more, the very real prospect of their Syrian homeland becoming another failed state tormented by a never-ending and brutal civil war.

Mound, I notice that you got your Gwynne Dyer from the New Zealand Herald so I searched for Canadian sources. The biggest I could find was the Sudbury Star. I may be wrong but I think the big Canadian papers like the Globe and Mail, The National Post, The Toronto Star, etc avoided this one.

I'm sure several of our "allies" remember the Chretien government's decision to decline Cheney's invitation to join him in hell.

I'm equally sure they now wish they'd made the same decision.

Simpson was opposed to Bush/Cheney shock and awe back in the day. It puzzles me why he's being suckered now.

Maybe his membership in the Tri-Lateral Commission is at stake.

@ Toby - The Aspers saw to it that Dyer was dropped by all the CanWest papers and PostMedia continued the same policy. His stuff would also not suit the editorial cant of the Globe. The only outlet I know of in Canada is the Georgia Strait which is where I usually find his columns.

@ Dana - I don't get it either, especially now that the world is awaking to what a total clusterf__k this has become. Simpson ought to know better.