Son of Falwell Out to "End Those Muslims." 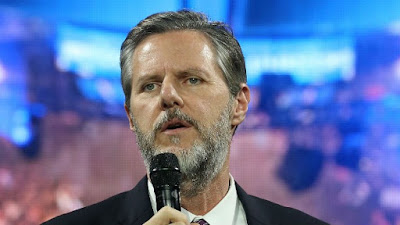 I don't know how to break this news but it turns out there's a Jerry Falwell Jr. and he's the president of something called Liberty University.

President Falwell is urging Liberty U students to start packing heat. He wants them to carry concealed weapons to class.

“It just blows my mind when I see that the President of the United States [says] that the answer to circumstances like that is more gun control,” he said. “I’ve always thought if more good people had concealed-carry permits, then we could end those Muslims before they walked in.”

Falwell is the son of the late Moral Majority founder Jerry Falwell, who infamously blamed the 9/11 terrorist attacks on abortionists and homosexuals.

Liberty U is aptly located in Lynchburg, Virginia. Check'em out. They've even got online courses.
Posted by The Mound of Sound at 2:08 PM

Never expect a real 'Murican to emit more than extreme dross, wave the Confederate flag and just hate them other people. And we live next door to these buffoons.

Mound, there is no scarcity of crazies. I think America is at war with itself - daily killing using guns will promote his local terrorists. Everybody hiding guns will help his fellow Americans kill each other.

@ Anon 5:04. It's important that we never lose sight of "sane America." There are a lot of Americans who don't subscribe to this madness that has beset their country. In a democracy their quest for moderation would have far more sway but America is no longer a democracy. The will of the silent majority hasn't been heard in the halls of America's Congress or its state legislatures for many years.

LD, it is crazy to encourage everyone to carry concealed firearms. It's just plain nuts especially coming from someone who claims to follow the teachings of Christ. Yet this Mk.2 Falwell knows he's preaching to a fundamentally rightwing choir, his constituency.

It is times like these, Mound, when one wishes the Rapture would happen and take the 'righteous' like Falwell to their 'reward.'

Liberty has won a lot of national debating competitions against other universities. With this kind of rhetoric, I'm not surprised.