The Wheels of Justice Groan and Creak in the Duffy Trial 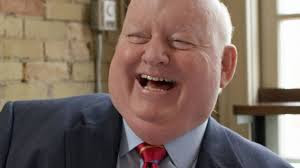 The problem with "political trials" is that they're show trials, staged events. That means the players have to go through the motions even if their hearts aren't into it.

This is about Duffy, Senator Marooned, the Cavendish Cottager.

Even former Globe luminary, Geoffrey Stevens, was calling it a "show trial" that had lost all purpose and meaning after the ouster of Shifty Steve in the last federal election. Stevens argued that Harper no longer needed the political smokescreen and the whole thing should be shut down.

Me? I wasn't so sure and thought it might be best to wait until the Crown had at Duffy on cross-examination. Now, with the reservation that news accounts of trial proceedings are hopelessly inaccurate, misleading and often biased, I scoured every print story I could find about Duffy's ordeal at the hands of the prosecutor - only to emerge with just one question, a resounding "WTF"?

The questioning seemed inane, pointless. There was no slashing attack, no rapier thrust, none of that. It was the prosecutorial equivalent of erectile dysfunction or at least so it seemed to me from parsing Kady and Christie and the rest of those miserable scribes.

How could this be? This trial has gone on longer than it took Noah to hammer together that Ark thingee and yet here was the Crown dwelling on irrelevancies such as Duffy's smear job of Stephane Dion. That's got bugger all to do with these charges - nada, zip, zilch.

Urgent phone call to Ottawa to an old buddy who has sat in on most of the proceedings. A veteran lawyer and former judge. Turns out he was there for the cross-examination. I popped the question.

Old Friend volunteered that he spent a good deal of time observing the prosecutor's body language (it's a 'judge thing') and, to him, it seemed to confirm what he was hearing - the Crown is padding, marking time. It's filler. You can't go this long without at least putting in a couple of days, maybe three,  of cross-examination lest people start talking about what was really going on.  So you fling out a few things to give the scribblers something to file, to keep them distracted, and then you close.

Now Old Friend added that other Crown attorneys had mentioned that Duffy's prosecutor didn't like this case from the get-go. They all had the sense that this was a show trial orchestrated from Parliament Hill, A-Division and some accommodating folks at Queen's Park. The Crown is like a WWI infantry captain in the trenches. When the whistle blows it's up the ladder and over the top.

The Crown called the obligatory witnesses and Duffy's lawyer, sitting behind his Maxim gun, mowed'em down.

Old Friend also mentioned conversations he's had in recent months with some senior RCMP types who are fuming at the way their current commish, Bob Paulson, allowed his strings to be pulled by Harper's minions. With Ralph Goodale now at the helm as public safety minister, watch for Paulson to get the hook real soon.

Old Friend says it's all over, everyone including the judge is utterly exhausted with this nonsense. He says it's conceivable Duffy could be found guilty on two or three of the really minor charges but, then again, so could most of his fellow senators.

I asked whether the Crown might be holding something up his sleeve - rebuttal witnesses such as senators LeBreton, Tkachuk and Stewart-Olsen to refute Duffy's otherwise uncontradicted evidence? Old Friend says the Crown knows what Don Bayne has waiting for those jokers if they ever get on the stand and at this point nobody wants to have to clean up the blood.

Your conclusion gets to the point, Mound. This was all about extracting a pound of flesh from Duffy. They won't get what they wanted. And nobody wants to take responsibility for the debacle.

The only thing that would have given me any respect for Duffy, would have been his admission that he got the Senate job for derailing Dion, which is why I thought the Dion question was interesting.

However by his answer he just remains a fat old asshole with no integrity and enough money to buy a good lawyer.

There is nothing about this case that couldn't have been handled internally by the Senate, in principle.

With Harper gone it looks Duffy case has become irrelavant.

Duffy successfully damaged Dion but it looks he will not be held accountable for it. It looks Duffy will keep his seat in the Seanate. That is the nature of our democracy.

From the start it was obvious that the crown persecuters were pissed at being forced into this embarrassment. A show trial worthy of Stalin for the greater glorification of Harper , to punish a peon who got caught in the spotlight.

Today the crown's got the word: under no circumstances let the $90K get any more light.

We know Paulson whispered into the shell like of Cpl. hears a who but who gave the persecuters their marching orders. This is a lot like an episode of Yes Minister. All smiles, slease and backstabbing.

Reading both Kady's and the CBC's live blogs today I was surprised at the lack of substance of the questioning about the fitness trainer. I thought this was the single charge where Duffy was vulnerable, but the Crown tiptoed away quietly. Are they that worried about a stain on their career ?


In reply to all your thoughtful comments:

60-days at trial. That's a courtroom, staff and a judge for 12 weeks, 3 months. Plus all the pre-trial motions and stuff. Plus two Crown counsel plus support staff plus oodles of trial prep. Plus the investigatory costs - RCMP time mainly but that's on the federal tab, the rest is provincial. The province and people of Ontario have just shouldered a very hefty bill for a complete farce.

This was a political show trial. It was a completely vexatious proceeding to give an unscrupulous prime minister political cover. It was such a farce they had to invent a novel crime, the 'immaculate bribe.' That corrupted the national police service (not that they were angelic anyway). It was ultimately an abuse of process, a legal proceeding instituted for wrongful, collateral benefit.

Friend Rumley nailed it when he wrote, "the crown's got the word: under no circumstances let the $90K get any more light." And so, today, the Crown ended the cross-examination of Duffy without having asked a single question about the cheque.

I can only imagine what is going through Justice Vaillancourt's mind tonight now that the trial is over, save for argument. It'll be interesting to see if he convicts Duffy of anything and, if not, whether he even gives reasons from the bench.

No matter what we think of Duffy, no matter who was pulling the strings behind the emerald curtain, the Crown put the defendant through 12 weeks of trial for what? Payments to a personal trainer, a few travel expenses? That's a travesty I don't see how the judge can overlook.

Don't know about you, but a Creek was where I went fishing as a kid.

You're looking for "creak" in that heedline. Ahem.

Otherwise I find your argument spot on with regard to the Crown.

But I still think Duffy has managed to get away with something anyone with any real ethical sensibilities would have avoided in the first place. Basically he gave the Lieutenant Calley defence - I was just following orders. They say ignorance of the law is no excuse when the average joe gets nailed for something or other. Duffy wasn't even ignorant of the law the way he tells it, but decided to just submit false expenses anyway, from rent to meals as well as undeserved travel expense recovery.

He deserves some time in the crowbar hotel on a strict diet no matter what. If he basically gets off, what does that tell us about the sham justice system we have? I hope for a bit more than a suspended sentence, so that I don't have to listen to him on the natter radio/TV circuit crowing about it all, because that would be the height of utter BS. He's a mean little speechifier for hire which is how he waded into the trough in the first place.

Yes indeed, Anon. Having grown up in a house on the banks of Pike Creek I ought to have known better.

I doubt he'll get time. My guess is a conditional discharge. I think his counsel has some pretty good arguments ready for closing.

What do you think we ought to do? Should we run half the Senate through the criminal courts for many of the same offences? Does 'equality before the law' demand any less? Can the Crown pick a victim, run him through a 12-week trial, ruinous by its very magnitude, "pour encourager les autres"? This isn't a question of sympathy for the Cavendish Cottager but an issue that goes to the administration of justice in Canada. These are principles that can bear on any of us whether culpable or falsely accused.

Duffy's Kanata abode is already encumbered by a couple of meaty mortgages. How does someone in his situation pay the legal expenses of a 3-month trial? I couldn't. I can count on one hand the people in my circles who could. Jesus, if I have anything that requires litigating, I have to do it myself. And yes, when I do, I realize I have an idiot for a client - it makes it all go so much more smoothly. Sort of like driving through rural France and trying to resurrect your highschool French from 20-years earlier.

Duffy certainly has received his comeuppance. His friends tell me that his health has taken a pummeling throughout this and that seems apparent from the news photos of the guy walking into the courthouse. I'm pretty sure his celebrity days are over. He saw to that when he treated his old colleagues like peons upon his appointment. Never smart to burn one's bridges with the low but powerful. Those whom the gods would destroy they first... you know. Hubris/Nemesis; yin and yang.

There are those rare people for whom being consigned to obscurity is the sharpest revenge. I knew Duffy when we were both at CFRA in the early 70s and then as we moved to CBC. That short, fat, bald little man's life was bathed in celebrity, at least in Ottawa. Strip him of that and what's left but a toad? I'd be content with that.