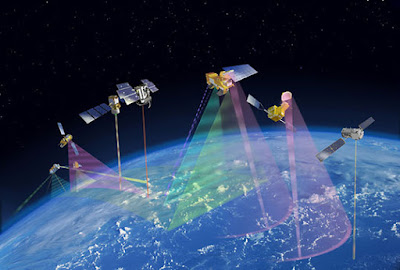 Greenhouse gas emissions and how to wrestle them to the ground are key elements of the Paris climate summit, COP 21. The negotiations have an element of a poker game to them. Nations argue, cajole and connive based on the state of their own and other nations' emissions. There can be a powerful incentive for some to bluff, to lie and, so far, it has worked moderately well.

What to do with those countries, inevitably the major GHG emitters, who might have reason to fudge (downward) their own numbers? That's where a "spy in the sky" could come in.

Satellites that could monitor and track greenhouse gas emissions are under development.

Most estimates of greenhouse gas emissions are now based on calculations of energy use and other proxy data, rather than on-the-ground measurements, leaving a huge margin of error when nations submit their figures to the United Nations.

While space-based measurement is unlikely to be mentioned in any deal agreed by the nearly 200 countries negotiating in Paris, the European Union is leading a push for a universal system of measuring, reporting and verifying emissions data.

European and Japanese satellites have been monitoring overall carbon concentrations in the atmosphere since 2002, but calculating emissions at a national or local level is far harder.

For example, the margin of error for China, presumed to be the world's top carbon polluter, is greater than the entire carbon footprint of Europe, according to experts.

Earlier this year, new data showed that China had consumed substantially more coal in 2014 than earlier reported, causing big revisions to carbon calculations. An earlier report showed its carbon output between 2000 and 2013 was about 3 billion tonnes less than previously estimated.

The US National Aeronautics and Space Administration (NASA), launched its first satellite to measure atmospheric CO₂ in July last year.

The challenge now is to convert the images – which pick up carbon concentrations in the form of yellow, orange, and red blobs – into emissions data, Steven Pawson, chief of the Global Modelling and Assimilation Office at NASA's Goddard Space Flight Centre, said.

NASA scientist Lesley Ott said that the satellite, named OCO-2, also showed there was potential to zoom into urban areas to record carbon pollution. A new device with that capability, OCO-3, has been developed for use on the International Space Station, but has been delayed by budget constraints, she said.

It would be a huge advance to have verifiable emissions numbers for major emissions sources such as the Athabasca Tar Sands, or Christy Clark's 'out of sight/out of mind' natural gas development in northern British Columbia, or America's gas fracking fields. It would also be a canary in the coal mine to have accurate, timely data on feedback loops such as the discharge of seabed methane or the methane and CO2 emissions from tundra fires and the thawing permafrost beneath.

The sooner, the better. Knowledge is power. In this case it could be the power to survive.

PHOTO: An artist's depiction of NASA's "Afternoon Constellation" or "A-Train" comprising five Earth-observing satellites.  Last year, OCO2, NASA's Orbiting Carbon Observatory was added to the A-Train.
Posted by The Mound of Sound at 10:26 AM

Let's hope the technology comes online soon, Mound. There is no time to lose.