Attack of the Psycho Sheep 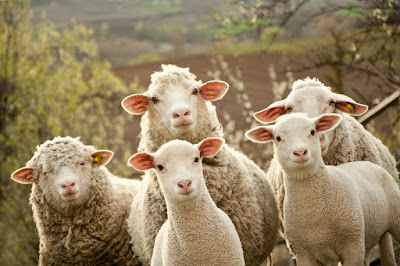 This one's too good to pass up.

Dateline: Rhydypandy, a village in Wales.

A flock of sheep has gone on what is being described as a "psychotic rampage" through the village of Rhydypandy after apparently eating cannabis plants dumped by a local grow-op factory.

County councillor Ioan Richard raised the alarm, saying the sheep have been "roaming the village" causing havoc by breaking into homes.

"There is already a flock of sheep roaming the village causing a nuisance," he said.

"They are getting in people's gardens and one even entered a bungalow and left a mess in the bedroom."

He warned of the dangers of the rest of the flock discovering the remains of the cannabis plantation dumped at Rhydypandy, in the Swansea valley in South Wales.

He said: "I dread to think what will happen if they eat what could well be cannabis plants - we could have an outbreak out of psychotic sheep rampaging through the village."

Dreadful, ghastly, foul - relax, it sounds like they've got the munchies. Get some chips, maybe a bag of Oreos, - problem solved. Oh yeah, you should also confiscate their rolling papers and lighters while you're at it.

then again, Mound, they could simply be high on that rarefied Welsh air.

'Attack of the Psycho Sheep' Seems like there might be an Academy Award Winning screenplay in there somewhere.