Has Slick Lost It? 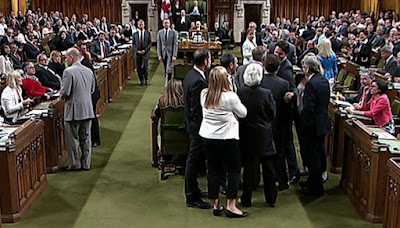 A bizarre spectacle in the House of Commons during the debate on the Liberal government's blatantly unconstitutional assisted dying legislation.

Video shows Trudeau crossing the floor, taking the Tory Whip, Gord Brown, by the arm and ushering him back to his seat. There was apparently some further scuffling in which Trudeau allegedly elbowed NDP MP Ruth Brosseau. That led to a shouting match between Trudeau and Angry Tom Mulcair following which Trudeau apologized "unreservedly" to Brosseau. It's not apparent from the video that the Brosseau incident was intentional.

CTV's Don Martin explained that Trudeau saw that the Tory Whip was being blocked, apparently intentionally, by several NDP MPs to prevent Brown from taking his seat.

At one point Liberal MPs rose from their desks and a number crossed to the opposition side of the House.

This is pretty bizarre. A prime minister crossing the floor to take the Tory Whip, like some errant schoolboy, by the arm and send him back to his seat. Is Trudeau cracking up? Does he imagine he truly is the Dauphin?

As for Ms. Brosseau, she seems to have all the dramatic skills of a World Cup footballer.

Sorry but the CBC clip wouldn't embed. Follow the link above and watch it for yourself. What do you think?

On reflection I think the incident revealed that the NDP stunt revealed that Trudeau allowed them to push his buttons. Angry Tom's feigned indignation was pure bullshit and Brosseau's plaintive whinge about how she was so distraught that she had to leave the House to collect herself was befitting a World Cup footballer staging a foul.

I think we needed Rougned Odor.

They are all children.

Bah, pretty poor show compared to the true emotions in the Japanese or South Korean legislative houses where a real scuffle can break out.

Just heard the notorious self-important nitwit Rosemary Barton opine on this event on the National. She was more fun to laugh at than the scuffle itself.

I really do not think this JT incident is important at all, but with the Canadian propensity for dwelling on the completely unimportant while simultaneously gazing at navels and ignoring the big picture, it may have legs. Perhaps Mulcair will collapse from an apoplexy attack, and Ambrose can utter words not actually scripted by someone else, which would be interesting to observe. She's the ultimate deer in the headlights pol to me.

I tend to agree, Anon. The whole Dipper farce was staged including Angry Tom's tirade. I guess when you've returned, for good, to your home in the political basement that's what we can expect.

.. hyperbole & faux outrage wuz the order of the day.. The entire farce was pure Shakespeare meets Monty Python with fatty Harper spotted by eagle eyes having slipped in the backdoor to vote. The specific snit was about libs moving to change a rule temporarily - to allow less delaying debate on their Assisted Dying legislation.. The kabukiness of the two whips wending there way to bow to the Speaker, bow to each other then take their seats was dealyed by the kerfuffle or ludicrous kettling of the Con whip - led by mad Tom. that Ms Brousseau was jostled & may have caught some elbow in the rib cage for her role in the skit is unfortunate.. but now legend. Ideally she was not spotted at the local steakery or bar, nursing her wounds too late. Mulcair took full advantage of course, launching in full court mode - finder pointing & getting all shouty.. and lo there at the far fringe stunningly stout MP Harper a grinnin. The irony of course - this was all about Assisted Dying legislation but you'd think from the shock and awe of the poor traumatized MP's this was all about them. I guess it was ..

A bit of overrehersed street theatre combined with some improv. Unfortunately Mulcare has adopted Mitch McConnel as his obstructionist muse. Was she elbowed ? bumped is more like it and she was doing the lean in thing. The bump may have come from the con whip as much as from Trudeau. Did you notice that the first thing she did was start working the phone.

isn't a prime ministerial contempt of parliament an automatic prorogue?

Hmmmm! There is something not quite right with this incident. The Tory Whip is interfering with procedure. The Back yard jockeys are demonstrating their ethical abilities by setting the scene for a brawl.
The Tory Whip needs to appologize...that's who.