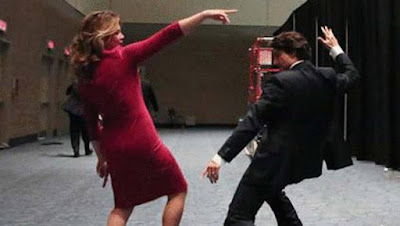 Now that everyone is analyzing Justin Trudeau's first six months in office, not surprisingly so is Justin and, in his opinion, he's doing just fine.

According to the very Liberal, Toronto Star, Justin is especially proud of all the time he's spent out of Canada, making his mark on the world scene.

“One of the things some of you may have picked up on is I’ve been fairly engaged internationally over the past six months to try and ensure that Canada is seen as a strong and active and valuable trading partner on the world stage,” Trudeau told reporters.

Back before he became prime minister, Trudeau’s favourite word was “program.” Now, though, it is “growth.”

Yessiree Bob, Canada's a good little, oh so reliable trading partner. That's what we're all about. You got the green, we've got the goods and we're not too fussy about what we sell to whom, provided you've got plenty of green. We'll even sell you state-of-the-art Death Wagons, hundreds of 'em, and the best part is - no questions asked. We don't ask any questions and, sure as hell, we don't answer any questions either. Your dirty secrets are safe. Our lips are sealed.

Those guys? Chumps, both of them. They should have ditched all that fancy stuff and gone mercantile, just like Steve and Justin. No, they dropped the ball with all that "honest broker" bullshit. They should've been tradin' and growin' and chasing the dream of energy superpowerdom, Harper and Trudeau's shared dream.

Fortunately Steve left a clear path for Justin to follow. With guidance like that, our new mercantile prime minister can't go wrong.
Posted by The Mound of Sound at 7:41 PM

Liberals or Tories , they both have the same backing.
Paribas has supported both over the years.
To hope for change was natural; to expect change was and is delusional.
In the excited States of America ; the rise of Sanders and Trump is a result of the realisation that the status quo does not work.
Canada has no such push back to the establishment! we accept or try nothing that interferes with our paycheques,

And Pierre travelled to China to open trade, much to the chagrin of Dickie Nixon, then occupying the Oval Office. Your selective cynicism is showing again. Perhaps you're now follow the isolationist example of Heir Trump. C'est domage.

This is all the more reason, Mound, to hold Trudeau to account at every opportunity. When he fails to live up to his rhetoric, he must be called on it. To do anything less is to betray democracy.

@ Trailblazer - we don't seem to have the collective will to demand real change. I'm sure Mulcair saw that when he ran such a centrist campaign. Nobody,not even Mulcair campaigned on labour. That segment of society, blue collar, has been made redundant in political discourse.

Bill Maher got it right a week ago when he said the Democrats were no longer the party of the American people. They had become the party of the white collar professional class. He attributed the rise of Sanders and Trump to that disenfranchisement.

International affairs? That can mean a great many things, some of them quite significant. However Trudeau went on to set the bar as low as it can go - trade. Trade and growth. Those, along with indigenous matters, will be the focus of his government.

We've seen his approach to trade and most Canadians have given it a big thumbs down. The TPP seems a reality more probable than ever with Trudeau's focus.

Perhaps even more interesting is what wasn't mentioned starting with the environment whether that be adapting to climate change, both the early onset impacts we're already receiving and the more serious impacts that will follow, and doing Canada's part to decarbonize. Harper set a laughably paltry target for carbon emission reductions. Following Trudeau's industrial/energy policy we don't have a chance of even meeting Harper's target.

Democratic renewal, not even on his radar. Electoral reform - yada, yada, yada.