The Struggle to Preserve American Hegemony Over Europe 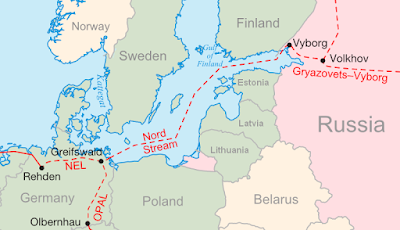 For decades the United States has been trying to prevent any direct line connecting Russian fossil energy and Europe.

Few recall that, prior to the 9/11 attacks, American firms were courting the Taliban, hoping to get the nod to build the TAPI, trans-Afghanistan pipeline, to divert Caspian Basin oil and gas into Pakistan and India thereby keeping the resources out of Russian control. As then head of Halliburton, Dick Cheney led a team lobbying the Clinton government to take the Taliban off America's terrorism black list. Halliburton even entertained prominent Taliban representatives at its offices in Sweetwater, Texas.

Part of America's schemes has been to route Russian gas lines to Europe through Ukraine, a convenient choke point. That's why Washington is apoplectic about Nord Stream 2, a direct pipeline to carry gas from Russia across the Baltic to Europe.

And so, being the world's Bully Boy, the US is threatening sanctions to any European company that dares buy gas via Nord Stream 2.

The Trump administration is edging closer to imposing sanctions on energy companies from Germany and other European countries in a bid to scuttle the construction of a politically contentious Russian gas pipeline across the Baltic, according to three sources familiar with the issue.

Officials are still looking at other ways to block to project, known as Nord Stream 2, a natural gas pipeline project meant to bring Russian gas into the heart of Europe. But key figures in the administration now view sanctions as an increasingly likely option.

The measure would add yet more tension to the relationship between the United States and Germany, where officials are already fuming over President Donald Trump’s punitive moves on trade, his decision to withdraw from the Iran nuclear deal, and other issues.

“They will stop at nothing to block Nord Stream,” one of the sources said, referring to members of the Trump White House.

... The friction was apparent during German Foreign Minister Heiko Maas’s visit to Washington last week, which included tense exchanges between officials from both sides — over the Iran nuclear deal, trade, and the Nord Stream project.

National Security Advisor John Bolton and other top U.S. officials see the project as a threat to the United States and European security and are determined to stop it, the source said.

And relations between Europe and the United States continue to unravel. Meanwhile, Foreign Policy's  James Traub writes the obituary of the Trans-Atlantic Alliance, 1945-2018.

The Atlantic alliance, built to contain the Soviet Union in the aftermath of World War II, began to die when the Cold War ended. What kept it alive over the last three decades has been less strategic necessity than a convergence of values — the values of the liberal postwar order. Now, the senior partner of the alliance, the United States, has lost interest in those values. The alliance was already a corpse, but Donald Trump drove the last nail into its coffin when he decided ...to withdraw from the nuclear deal with Iran.

What now? The United States will lurch from crisis to crisis, but Europe faces more existential questions: It has been expelled from the garden — albeit a very thorny one — maintained by U.S. military and diplomatic power and now must build a new home of its own. The European diplomats, ex-diplomats, and scholars I have spent the last few days talking to agree on that much. They’re less sure whether Europe is up to the task.

...Europe ceased to be the world’s geostrategic center when the Soviet menace disappeared. The humanitarian crises of the next decade reinforced the shared values of Western nations, but 9/11 abruptly diverted the United States to an obsessive focus on the Middle East. Though Barack Obama restored the shared faith in multilateralism and institutions that George W. Bush had breached, his own interests lay more in the Pacific. He yearned to pivot away from the yawning pit of the Arab world to Asia. Obama wanted the United States to face toward the future, not the past.

The American people, meanwhile, preferred to face home. They wanted a pivot to America, and they voted for the candidate who promised to deliver it. It has thus fallen to Trump to deliver the coup de grâce to the alliance that has defined the postwar world. The Iran decision followed his decision to impose tariffs on European aluminum and steel, which followed his decision to withdraw from the Paris climate accords. Trump is no more contemptuous toward European allies than Asian or Latin ones; the only opinion to which he defers is that of his base.

...Europe’s old reputation for deference and submission to the United States was reinforced by the spectacle of French President Emmanuel Macron and German Chancellor Angela Merkel visiting the White House in the hope of propitiating the First Bully and then being dismissed with scarcely a “by your leave” — and oh, by the way, we’re still coming after your steel industry. But perhaps Europe’s leaders needed the shock. Hours after Trump’s announcement, Macron, Merkel, and British Prime Minister Theresa May issued a joint statement reminding the world that the deal had been “unanimously endorsed by the U.N. Security Council” and thus remained “the binding international legal framework” on Iran’s nuclear program. European Council President Donald Tusk announced that Trump’s Iran and trade policies “will meet a united European approach.”

...For older Europeans, including ones who have spent much of their lives regarding the United States as a barely civilized menace, the prospect of facing crises with no one at their back will be strange and unsettling. The mental transition will take far longer than the political one. But Trump is sure to hasten the process. “I’m not sure the U.S. gives a damn about the West,” one senior European diplomat says. “When you speak to the U.S. about the Euro-American relationship, you look like the most ridiculous guy on Earth. Nobody in the administration cares about that.”

And Trump is worried about a gas pipeline across the Baltic?
Posted by The Mound of Sound at 1:32 PM

I doubt Trump is worried about the Russian gas pipeline at all. You'll note that the article says that unnamed "officials" are worried about it. Which is essentially meaningless, since Trump regularly contradicts even members of his cabinet. Trump is not interested in blocking things that make money for Russians to launder through his properties.

The USA likes to control everyone.
Going outside the USA sphere of influence for weapons or goods is tantamount to treason in the USA eyes.
Hidden beneath the calls of 'special relationship' Canadian neighbours and other such touchy feely descriptions is a USA desire to be the dominant military and economic country in the world.
The power the USA had to do so is eroding and hence we have Trump who by hook or by crook! intends to bludgeon the world into the image of the USA.

And the US-backed Qatar to Turkey natural gas pipeline that Assad nixed in 2010 because it crossed Syria also cheesed off the US. Next thing you know, Syrian civil war. The pipeline was intended to compete with Russian gas delivered through Ukraine.

The US is quite ruthless. The State Dept and CIA, Hillary's pals, want Russia's and Iran's balls, and they have managed to co-opt Trump by making him believe the neocon line by tricking him into thinking it's all his own ideas. He'd never guess, the dumb narcissistic lout. The US's foreign policy is essentially no different than if Hillary had been elected prez. They let him have his great trade wars sort of if it suits and at the moment it does, but strategically, hating Iran, Russia and China and heading them off is the top of the US agenda. Total world hegemony is the driving force.

If Germany and the EU, minus the UK puppy on a bad day as they are pretty fine backstabbers themselves, get in the way, as with the Baltic gas pipeline which benefits Russia, well they'll find out that Uncle Sam is hardly beneficent. Why does the US export vast quantities of LNG to Europe? To obviate the need for Russian gas so that Russia remains sanctions-struck and earning little foreign exchange. Going on about Trump and Putin being "friends" is foolish; Trumps's not running the real foreign affairs show, he just thinks he is. Look at all the harumphing about N Korea being untrustworthy by "officials". The real untrustworthy villain worldwide is the US. They'll renege on any deal at any time as they see fit.

Meanwhile the Euro-wusses are finally realizing they've been checkmated by the U.S. They have to pay international debts with USD, the reserve currency, so they cannot rebel on the Iran sanctions re-imposition. The US can simply refuse to process payment and bugger up the European banks. Same with the Baltic gas pipeline in future.

The EU left it too late. They didn't organize their own reserve currency, didn't form their own military. And now they are discovering, beyond the swell-sounding words of the past, the US doesn't give a single shit about them. And they're stunned. Naive bastards. At least we in Canada and Austalia have been good boot-licking vassals, especially since the US ousted PM Gough Whitlam in Oz in 1975. No, we mind our p's and q's. With good reason. The over optimistic Europeans thought that at heart the US was Mr Nice Guy.

No, it's Sociopathia. And if they think you're buggering around with them, then you'll see what 70 countries have seen since WW2, armed force persuasion. Ruthless and selfish they are. The two Dulles Bros lied to Truman, Ike and JFK and ran State and the CIA their way. It's never stopped. History needs to be remembered.

An excellent summary, BM.
A small correction: "The US is quite ruthless." It should read: The US is ruthless*.
So it is any other big power today; Russia, China, or the past powers such as Spain or England. And there is no surprise that level of ruthlessness increase with level of power. Hence we shall all support a multi-polar world. Competition of ideas does wonderful things.

*For a fantastic primer on how "Money and hard power count, and that's that," read a short article by our own Neil Macdonald.
http://www.cbc.ca/news/world/the-ukraine-crisis-through-the-whimsy-of-international-law-1.2559980

As for united Europe, the only real contender to the global supremacy of USA, it had to be destroyed, with a little help of globalists.

Aw, this was a very nice post. In concept I want to put in writing like this additionally – taking time and precise effort to make an excellent article… but what can I say… I procrastinate alot and on no account appear to get one thing done. casino bonus