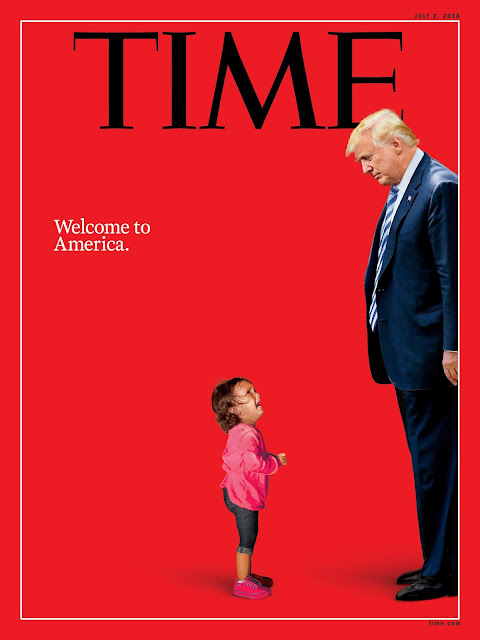 Time magazine launches its July 2nd edition with a gut-wrenching and long overdue look at how Donald Trump has debased America.


Presidents have many jobs, and one is telling us who we are.

For the first 240 years of U.S. history, at least, our most revered chief executives reliably articulated a set of high-minded, humanist values that bound together a diverse nation by naming what we aspired to: democracy, humanity, equality. The Enlightenment ideals Thomas Jefferson etched onto the Declaration of Independence were given voice by Presidents from George Washington to Barack Obama.

Donald Trump doesn’t talk like that. In the 18 months since his Inauguration, Trump has mentioned “democracy” fewer than 100 times, “equality” only 12 times and “human rights” just 10 times. The tallies, drawn from factba.se, a searchable online agglomeration of 5 million of Trump’s words, contrast with his predecessors’: at the same point in his first term, Ronald Reagan had mentioned equality three times as often in recorded remarks, which included 48 references to human rights, according to the American Presidency Project at the University of California, Santa Barbara.

Trump embraces a different set of values. He speaks often of patriotism, albeit in the narrow sense of military duty, or as the kind of loyalty test he’s made to NFL players. He also esteems religious liberty and economic vitality. But American’s 45th President is “not doing what rhetoricians call that ‘transcendent move,'” says Mary E. Stuckey, a communications professor at Penn State University and author of Defining Americans: The Presidency and National Identity. Instead, with each passing month he is testing anew just how far from our founding humanism his “America first” policies can take us. And over the past two months on our southern border, we have seen the result.

...A week after his return from the June 12 summit with North Korea’s dictator, family separation dominated the national conversation like no other political story since former FBI chief James Comey was shown the door. A steadily building wave of revulsion washed over the political spectrum, from MSNBC to the editorial page of the Wall Street Journal to Franklin Graham and into the White House living quarters, when a spokeswoman for the First Lady said she called for “a country that governs with heart.”

Which leaves us facing a question: What kind of country are we? The world has been nervously asking that since November 2016. And while Trump ultimately capitulated on the forced separation of children, his new order suggested that families would be detained not only together, but perhaps indefinitely. For many Americans, the forced separation of immigrant families left them looking into the void from which the brutal policy emerged: the dark space left by the words Trump does say.

...What’s lost in Trump’s approach is any expectation of higher purpose. He makes no apology for lavishing praise on authoritarian leaders that past U.S. Presidents dealt with at arm’s length—Egypt’s Abdul Fattah al-Sisi (“somebody that’s been very close to me from the first time I met him”), the Philippines’ Rodrigo Duterte (“great relationship”) and Russia’s “strong leader” Vladimir Putin. When China’s Xi Jinping announced he would be President for life, placing 1.4 billion people deeper under government control, Trump offered congratulations.

...The story we tell the world is also the story we tell ourselves. Trump began June by blowing up the G-7 gathering of the world’s leading democracies by refusing to sign a joint statement endorsing “shared values of freedom, democracy, the rule of law and respect for human rights and our commitment to promote a rules-based international order.” He slapped tariffs on Canada, Mexico and the European Union, advised France to drop out of the E.U., and urged Germans to support right-wing anti-immigrant parties intent on deposing Chancellor Angela Merkel. The leaders of France and Canada replied by citing “values,” but Trump had moved on to Singapore, where he praised North Korea’s dictator Kim Jong Un, whose regime actively operates a network of gulags, as “a funny guy … very smart … his country does love him. You see the fervor.”

...It was Alexis de Tocqueville, the French observer of the early American character, who recognized the danger of placing too much value on business, law and order at the expense of the higher values. Warning of the country’s obsession with material gain and the enforcement of order necessary to pursue it, he wrote, “A nation that asks nothing of its government but the maintenance of order is already a slave at heart.”

Which is why the test posed with Trump’s “zero tolerance” policy is as much about our future as it is about the tragedy of the families separated by its implementation. Trump may have backed down on the specific practice of family separation, but the larger question remains. In the balance between the integrity of the U.S. border with Mexico and a parent’s love for a child, where will we come down?

“Without a Border, you don’t have a Country,” the President wrote on June 19. Everyone knows that. The question is, what kind of country?

“Without a Border, you don’t have a Country,” the President wrote..


We are all African..

But some of us Africans are more equal than others. That's why we have uptown for the more-equal more-deserving Africans and inner-city shit-holes for the less-equal – more colorful – Africans.

Ain't it a shame!

Some call it "Babylon."

(They can see The Machine!)

I remember I stopped reading Time about 20 years ago. Around the time I read this surveillance state article that literally said, if you got nothing to hide you don't have anything to worry about.

At the time I thought it was just more hollow, incompetent journalism, of which I had grown somewhat accustomed to. (Not all the news media was Junk News, of course. My favorite was the Fifth Estate. Linden MacIntyre really knew how to spin a great yarn! Don't make 'em like they used to, that's for sure!)

But looking back with 20/20 hindsight and the knowledge that Barrack Obama would create this giant Orwellian surveillance system that keeps your online activity and cell phone calls in an intelligence-agency database, (how ya doing fellas!) – this varietal of Fake News actually turned out to be a narrative. A part of a bigger plan.

They were basically easing the cattle into what was coming at that point in time.

What else are they easing us into? What else do they got coming?

Me – as crazy as I might sound – I'm feeling pretty damn good that Donald J. Trump bothered to go through all the hassle he went through – and is still going through – to stand up and say: Look guys, this thing of ours has gone too far. – It has. You know it has. – It's time to turn the page. See what's next on the menu. Repurpose all this manic energy around the world. Begin a new chapter. Better that than risk losing it all. And believe me, I know what it feels like to make a bad bet and watch it all go down the tubes!

At a distant past, we were all African, but now we are no longer!
TB and others mindlessly repeating the mantra “We are all African” need to brush up on the current research into genetics. The field is moving so fast that even the 2014 book “A troublesome inheritance” by N. Wade is somewhat stale.
We have evolved into 4 main types of races: Black, White, Asian and Australasian. Due to the human migrations over the past 10-15k years many of us have a significant component of mixed races, e.g. Arabs, South Asians, South Europeans, Native Americans and so on. The average genome of those 4 main races differs by 2-3% which is the same % difference between average genome of a human and a chimp. The difference of 2-3% is huge, even when taking into account that there is no equivalency between genes. More importantly, last ~10k and advent of agricultural and industrial societies put enormous evolutionary pressure on some races, which created a rapid genetic selection. Google the “Russian fox breeding experiment” to see the incredible speed of selection when animals are put under evolutionary pressure.

Ooops, fake news. The girl in pink jacket was never separated from her mom!
I heard the story about separation yesterday on CBC radio, hosted by A-M Tremonti, she was in a hysterical frenzy.

“The Democrats, the longer they talk about identity politics, I got ’em. I want them to talk about racism every day."

Trump turns those who work for him into liars. And he turns his fellow citizens into barbarians.

Ooops, more bad news for fake news.
The mother "a poor, desperate, refugee" of that young girl featured on the cover of Time decided to leave two other, much older children at home with her husband and to pay people smugglers 6k USD for a trip . And to use her toddler child as a ticket to the promised land. Most of real poor folks in US will never see 6k in cash…
https://www.bbc.com/news/world-us-canada-44578339

Perhaps the next issue of TIME could feature and egg on the cover.