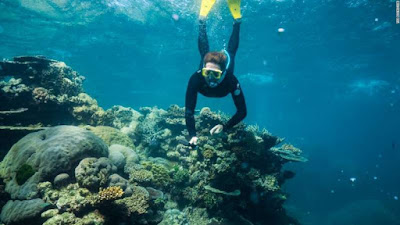 Sixty per cent more atmospheric heat has been absorbed by the world's oceans than we thought.

We've known for years that our oceans were the repository of most of the heat from global warming. It's been estimated that between two thirds and 90 % of the heat from man-made warming has been absorbed by the oceans. We've known that, for several years, surface winds were driving that warmer surface water to the deep ocean, building up a potential warming time bomb when that stored heat returned to the surface to be released back into the air.

All that's changed is that scientists now say we were a bit out on our estimates of how much heat had been absorbed in the ocean depths. Out by 60 per cent.

The research, published in the journal Nature Wednesday, suggests that the Earth is even more sensitive to fossil fuel emissions than experts thought.

Oceans absorb 90% of the excess heat trapped in the world's atmosphere, according to the National Oceanographic and Atmospheric Association (NOAA).

The paper's author, Laure Resplandy, said she and her colleagues found that the the oceans had absorbed significantly more heat than had been estimated in a landmark 2014 study from the United Nations Intergovernmental Panel on Climate Change (IPCC).

In the States, the Sierra Club lashed out at Donald Trump.


"The world’s oceans are the canaries in the coal mine when it comes to the climate crisis. The writing has been on the wall for years, but today’s report confirms that we have even less time to move beyond dirty fossil fuels like coal, oil, and fracked gas to an economy powered by 100 percent clean, renewable energy. This global crisis demands nothing less than swift and meaningful action by every world leader to ensure a safe and healthy future for all."

The thing is all that heat doesn't just wind up in the ocean depths and disappear. It's the first law of thermodynamics, conservation of energy. Energy can neither be created nor destroyed. Energy can only be transferred or changed from one form to another. When that trapped energy from the depths is released again, we are going to feel it.

Of course, we've got our own little Petro-Prince in Canada, Bitumen Boy Justin. None of this stuff, none of the danger, none of the dire warnings will affect his goal of flooding world markets with the filthiest, most toxic and highest-carbon ersatz petroleum on the planet, bitumen. Justin's not alone. He's joined by other little climate monsters - people such as Notley, Kenney, Moe and that guy Ford.

It was March, 2017 when Justin Trudeau tried to assure nervous oil execs in Texas that pushing high-carbon bitumen onto world markets just as fast as possible was some sort of twisted inevitability when he said, "No country would find 173 billion barrels of oil in the ground and just leave them there."

Despite all the science that has poured in since Trudeau's Liberals were elected in 2015, despite the urgent warnings telling us that the world is entering a sixth mass extinction and that fossil fuels have brought us to the edge of the abyss, none of it fazes Justin Trudeau.

As Bob Dylan said so many years ago, Mound, a hard rain is gonna fall. And not even the world's biggest umbrella, if I may extend the metaphor, is going to do the least bit of good.


What I have trouble believing, Lorne, is how our leaders, federal and provincial, are ignoring the science and the urgent warnings to decarbonize just as fast as possible. How can Trudeau, Scheer, Notley, Kenney and Moe ignore their warnings and instead try to drive through a new bitumen pipeline? Do they not believe the science? As the former Archbishop of Canterbury and colleagues proclaimed, leaders such as ours have broken faith with their citizens. They have abrogated their essential responsibility to our safety and to our future generations. As such we have the right and the moral duty to find ways to throw a wrench into their gears. Perhaps nothing short of an insurrection will work.

Voices crying in the wilderness.

Where have heard that before?

Prepare the way for the Lady, because SHE is our only hope.

" Perhaps nothing short of an insurrection will work."

Agreed. Demonstrations in 'free speech zones' only go so far.
One of my favourite treatises on this subject was written 50 years ago:

The closing paragraphs"
"It is in the nature of a demonstration to provoke violence upon itself. Its provocation may also be violent. But in the end it is bound to suffer more than it inflicts. This is a tactical truth and an historical one. The historical role of demonstrations is to show the injustice, cruelty, irrationality of the existing State authority. Demonstrations are protests of innocence.

The question which revolutionaries must decide in any given historical situation is whether or not further symbolic rehearsals are necessary. The next stage is training in tactics and strategy for the performance itself."