A Call to Civil Disobedience 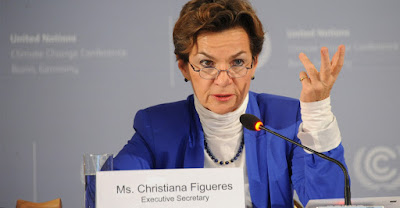 When Christiana Figueres calls for civil disobedience, it's about time we listened.  Figueres served as executive director of the UN Framework Convention on Climate Change from 2010 to 2016. She knows the mess we're in and the urgency of the moment.


“It’s time to participate in non-violent political movements wherever possible,” Christiana Figueres writes in “The Future We Choose: Surviving the Climate Crisis,” which will be released tomorrow by Knopf.

She co-authored the book with her strategic advisor, Tom Rivett-Carnac. The two also support voting:

“Large numbers of people must vote on climate change as their number one priority,” they write. “As we are in the midst of the most dire emergency, we must urgently demand that those who seek high office offer solutions commensurate with the scale of the problem.”

But they note that electoral politics have failed to meet the challenge, largely because of systemic roadblocks including corporate lobbying and partisan opposition.

They endorse Extinction Rebellion and Greta Thunberg. They evoke legendary activists who effected change on the scale required by the climate crisis, including Gandhi, Martin Luther King Jr., and Nelson Mandela.

“Civil disobedience is not only a moral choice, it is also the most powerful way of shaping world politics,” they write, citing scientific resources on the impact of civil disobedience.

“Historically, systemic political shifts have required civil disobedience on a significant scale. Few have occurred without it.”

Another kind of civil disobedience.

Not that I agree with it..
One man, one vote is becoming a thing of the past as is the idea of democracy.

I'm pretty sure they did the same thing last year to sabotage a vote they were going to lose. If I recall correctly the governor sent the police out to hunt down the truants and bring them forcefully back to the legislature but their prey got out of the state first.

True, they were successful last year and will continue to disrupt 'democracy' until they are in power themselves.
We see this happening albeit to a lesser degree in Canada with Jason Kenny's conservatives who refuse to participate in a greater Canada.

Only I don't think the concept of civil disobedience extends to political shenanigans, TB. That's certainly not what Figueres is getting at.

She has concluded that elected officials simply will not get the job done without being driven to produce results. So long as the gears turn smoothly they'll say whatever they imagine we want to hear and then go dangerously complacent.

We saw just this when Trudeau and McKenna strolled onto the floor at the 2015 Paris climate summit boasting that "Canada's back." We saw it again when the Liberals backed a climate emergency declaration one day and, less than 24 hours later, greenlighted the TMX expansion.

That's where you have to push back or else that's all you'll ever get out of them.