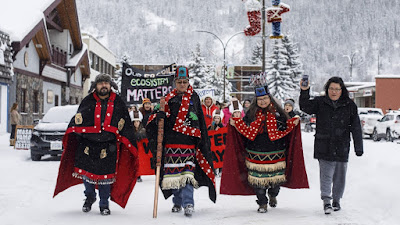 An Angus Reid poll finds that Canadians are split, almost half and half, on the Wet'suet'en/Coastal Gaslink demonstrations and blockades. 47 per cent support 'patience and dialogue' while 53 per cent want the blockades brought down using 'whatever force is necessary.' It's Ipperwash by a nose.

I suppose it's a safe bet that the company's polling base was under-represented among First Nations populations and so this may be weighted toward the non-FN majority.

A lot (78%) are worried that the protests have damaged Canada's reputation as a place for investment. There you go.

Team "Use of Force" or, as I call them, the Tories, support the force option by a bloodthirsty 89 per cent.  The Libs and New Dems favour the talking option by 60 and 79 per cent respectively.

Respondents were asked whether they thought the protesters were 'troublemakers' or 'committed people taking a stand on something they feel strongly about.' BC was evenly split. Alberta and Saskatchewan, however, were heavily on the troublemaker option. Ontario, Quebec and Atlantic Canada give a solid nod to the protesters.

It looks like the media slant has scored a hit with the population. Canadians have bought into 'elected chiefs' as the proper voice of First Nations. And, by wildly huge numbers, they're ready to put the blame on Trudeau for the whole mess. Only Liberals support the prime minister and, even then, by a 50/41 per cent margin.

For the other players it's also dismal. Horgan is polling at 18 per cent. Kenney's numbers mirror Trudeau's - 50 yea to 40 nay. Ford comes in even lower than Horgan at a dreary 15 per cent. Legault's numbers are favourable but not by that much, 41 to 37 per cent.

No one is looking good on this. That, I expect, will make Horgan and Trudeau hesitant to use muscle lest something goes horribly wrong and they get their very own Ipperwash and hand the First Nations another Dudley George.

Added into their political calculus has to be the Coastal Gaslink venture and whether the gas line to Kitimat is any more economically valid than Teck's Frontier mine proposal.  Nobody in Asia is paying $9/million BTU for methane. They're barely paying half that. And with massive new gas fields reportedly being discovered in the Russian sector of the Arctic Ocean, Canada's break even price may be a distant memory. Is that worth fighting over?

Searching for info about the Kitimat plant, little reality is on view. Most of the article on Google are just company PR. Changing to a image search reveals mostly artist impressions and a few photos showing bulldozed ground.

Is construction actually going ahead ? Does the company have any money ? Is anybody willing to loan for this project ?

I've been unable to find anything on the current state of the LNG plant/port project. In December, Chevron announced it planned to 'exit' the project, suggesting another company might find it a better fit. Chevron's 50/50 partner, Woodside Energy Int'l, is an Australian LNG producer but its website doesn't add anything to the precious little information from Chevron.

I have difficulty grasping who is playing at what on western Canadian fossil fuels. I have tried to list what I've learned from the financial sector walking, if not running away from bitumen to the collapse in LNG prices in Asia. Canada's corporate media cartel never likes to raise the viability of the ventures it so loyally boosts.

Likewise with Site C, "the largest project in the history of BC"
Also should/could be titled "the largest mistake in the history of BC".
Is it still floundering ahead? One would never know, according to news reports.
I have an acquaintance that has been labouring 24 hours a day (not just him, but the crews) in sub zero weather trying to stabilize the on site bridge, at huuuge expense! An expense that was never planned or budgeted for!
Any word from the main news sources? Nada. Not a peep.
For all I know (and hope) the project has shut down!
Maybe we should elect a Wet'suwet'en hereditary chief as our next Premier!

We're going to ruin a lot of good agricultural land for no other reason than to generate subsidized electricity for the LNG project, the resource that nets BC a pittance in royalties.

.. many answers may be found when Canadians (via an intrepid journalist or 10) are able to corral the corresponding facts re the twin pipelines & LNG plants & portlands of LNG Canada and Kitimat LNG. As I mentioned and per some of the recent links I sent (one in particular that includes fraud) Kitimat LNG is (was?) even larger scale than LNG Canada - three liquifaction 'trains' rather than two.

I found what I know re Kitimat LNG on the Cheveron web site. That project with Woodside already has (had?) signed Benefits Agreements with First Nations, including one with The West'suwet'en People and one freako Benefits Agreement with The Haisla People. It appears obvious that the respective Consortiums saw their best opportunity via the Band Councils and Tribal Chiefs and avoided Hereditary Chiefs. The entire scummy processes are nothing new. Money talks, Aboriginal Title walks.. Governments are supposed to do the regulatory and agreements.. but now delegate to the Consortiums (washing their hands of it ? Haha.)

Tom Mulcair was on with Evan Solomon last and a few other panelists and was quite clear how it appears from the existing Supreme Court of Canada POV.. via the key decisions involving Aboriginal Title. Nobody should mistake what is underway. The Petroleum 'players' are Pro at this stuff. Used to astonishing amounts of money, employing major Law Firms, entrenched lobbyists, accounting strategists, blue chip International PR firms. They know Government and Political Parties better than the Parties do. Loaning institutions, engineering firms.. you name it, they have the money and means to literally move mountains. Certainly Frontier has proven that while exporting mettalurgical coal from Alberta. The only thing they do not control is the Market Price, meanwhile they are complicit with Government in the erosion of and extinguishing of and confusing the reality.. of Aboriginal Law. They instead want 'Certainty'. When the told this to Harper and the late Saint Jim Flaherty, they got it via Harper's utter demolition of Canada's protective legislation of our inland waters.

The lists of who knows.. and knows what.. is long. Go back to Campbell and Christy Clark, pick up the chase via John Horgan. Same with Trudeau/Morneau - go back to Harper/Flaherty. The political fluckery is so entrenched that Canadian taxpayers role other than voting in shady elections for unusually shallow candidates, or supplying the tax $ needed.. is completely ceremonial and as such essentially misinformed or taken for fools by most Mainstream Media.. who are in on the crooked deals.. and pompous or craven enough to insult Canadians by 'endorsing' so called 'leaders' and their Political Parties. Lorne got into this a little ways back re 'parachute candidates' - thus a Kellie Leach from Ft McMurray flopped into a mixed urban rural horsey farm riding near Creemore, Ontario.. or Lisa Raitt in Oakville. We make multi millionaires out of these ceremonial riding figureheads aligned, and in harness to political ideologues such as Harper or Trudeau. They get ludicrous levels of insider trading information.. and essentially zero oversight. Who wants to look into what Scott Brison knows ? RE LNG, Lavalin, Bombardier, or Bitumen ? Or re Bank of Montreal's portfolio re Lavalin and Site C ?

Canadians are not just 'being taken for fools' (Tom Mulcair in Hansard) we are volunteering, voting and donating money and our tax monies 'to the cause'

And just look at the status quo, currently.. Canadians must 'trust' and vote Trudeau or Horgan.. or get the booby prize of Scheer's tattered & tawdry apparatus.. or in BC get the return of Christy Clark and Rich Coleman etc..

It is indeed a rolling shitshow, Sal, and I find it wearying. It's demeaning when, in a democracy, the public are left to sift through the detritus, hold their collective nose, and vote for what they guess will be the lesser of evils.