News From the Front - Earth Heats Up, Oceans Speed Up. 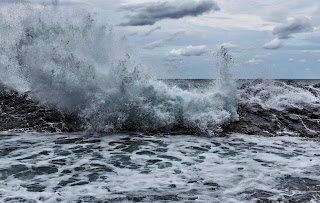 We just experienced the hottest January on record. 2.5 F, 1.14 C, above the 20th century average. Meanwhile the continent that exemplifies 'cold' is breaking records this month. Antarctica logged a record 20 degrees Celsius on February 9th.

Scientists warned that Antarctica's Thwaites glacier is melting faster than predicted thanks to warmer sea water eating away at its edges. The glacier is thought to be the 'cork in the bottle' that holds much larger ice sheets from slipping into the ocean. If these other glaciers go it is estimated we'll be dealing with about 11 feet of sea level rise.

The warming sea water helping to melt the Thwaites glacier isn't an isolated phenomenon. The oceans are warming everywhere, absorbing more heat as our atmosphere continues to heat. Another knock-on effect of this atmospheric heating is stronger winds. A knock-on effect of those stronger winds, is a speeding up of ocean currents including the ocean currents at work on the Thwaites glacier.


A study published ...in Science Advances finds that global ocean circulation has been accelerating since the 1990s. The study examined decades of observations from instruments that monitor the seas’ kinetic energy—a measurement of how fast the water is moving.

A closer look, region by region, suggests that much of the acceleration is happening in the tropics. And circulation also appears to be speeding up in other swaths of the Atlantic, Indian and Pacific oceans.

There are still some parts of the ocean that either aren’t speeding up or are actually slowing down, the study notes. But on the whole, as a global average, the waters are moving faster and faster.

The reason is accelerating winds.

Multiple studies have suggested recently that winds over the oceans are speeding up. And because winds are some of the primary forces that drive ocean circulation, they’re also causing the seas to move faster.

The implications of faster oceans are still unclear, according to lead study author Shijian Hu, a scientist with the Chinese Academy of Sciences. In an email to E&E News, he noted that faster circulation could change the way heat and nutrients are transported around the world. That could potentially alter global weather patterns and affect marine ecosystems.

There is one major current that is still slowing down, the Atlantic Meridional Overturning Circulation or AMOC. This current affects weather patterns in the Northern Hemisphere.


Studies disagree about exactly how long the AMOC has been slowing and what factors are responsible. Some researchers suggest that the AMOC goes through long-term, natural cycles of slowing and accelerating, and the recent slowdown is part of the cycle.

But many scientists believe that climate change is playing a strong role. They suggest that cold, fresh meltwater from the Greenland ice sheet is disrupting the current’s flow and causing it to slow down. Modeling studies suggest this effect may worsen in the future if the ice sheet melts at faster rates. 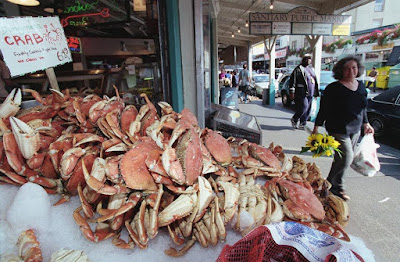 One other thing. As we continue to add ever more greenhouse gas to the atmosphere, more heat and CO2 are absorbed by our oceans. It's called 'ocean acidification.' This lowering of pH in sea water is playing hell with marine life. The latest victim is the Pacific Dungeness crab.


...the increased concentration of carbon dioxide in the atmosphere directly lowers the pH of the ocean and makes it more acidic. This increased acidity acts to dissolve calcium carbonate, the “bones” of most organisms in the ocean. Organisms with exoskeletons (like crabs) are especially susceptible to more acidic water because their calcium carbonate shell is in direct contact with ocean water.