Spotted on the Deutsche Welle web site, this photo of a pilot aboard a jetliner flying passengers out of China, presumably Wuhan.  Overkill? You decide. 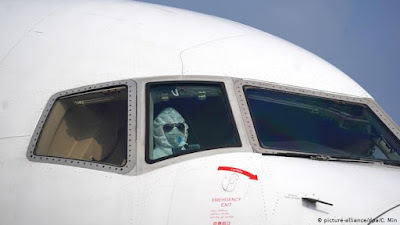 A German military aircraft carrying 128 evacuees from Wuhan was expected to arrive at Frankfurt Airport Saturday morning, but was delayed due to issues with Russia.

The Airbus A310 had been due to stop in Moscow for crew-change and refueling. However, Russia refused to allow the plane to land due to "lack of capacity" at the airport. The plane was diverted to Helsinki.

I'm sitting in the airport in Taipei right now after spending 5 days in Chiang Mai. So many people are wearing masks that I don't even notice it any more. I'm not worried but I fear that if I cough or sneeze, I'll be reported to the authorities and spend the next three weeks in quarantine. All the drugstores in Chiang Mai are sold out of masks. I've heard that the typical masks that people wear are not effective for protecting you from diseases, but are effective against spreading diseases. In any case, the new virus is supposed to be less serious than SARS, and if you are healthy, give you mild flu like symptoms if you contract the disease. It's nuts...people are nuts.

Thanks for the insights, Anon. Are you now headed back to Canada? It's in the news that the first case of human-transmitted coronavirus in Thailand has just been confirmed. Your experience suggests they're panicking. On the other hand, forewarned is forearmed, eh?

Hard to tell from the photo, but I believe that's the guy who recieved the "commission" on the Air Canada-Airbus deal!

if half the passengers turn out to have the flu, its not over kill because the air is circulated through an airplane. If no one has the flu, its over kill. one could say better safe than sorry, on the other hand given we have approx. at least 6 billion people on the planet and only a 5 or 6 thousand have developed the disease its over kill. we just don't know how this is going to go.

As to people wanting their governments to fly them home, I do hope they are paying at least a commercial rate for their seats. Its their decision to leave their countries, its not up to the taxpayers to foot the bill for these flights.

One couple and their child had been living in China for 5 years and wanted Canada to fly them home. They're not even Canadian taxpayers anymore. They got on a flight to England, where he is a citizen.

Karl Heinz has been out of the German's Greybar Hotel for a while now, Cap. Hell that could be him in the photo.


I can't argue, e.a.f. Modern aircraft are incubation tubes after all. I'm sure the family sitting down at the dinner table when you get home from the airport will appreciate the gesture.

The amazing sense of entitlement that Canadians living in Wuhan showed rather amazed me. "Oh why aren't we being rescued?", went up the wail. Amazingly, other countries repatriated citizens rapidly, but I bet a lot of them were temporary overseas duty white supervisors and engineers for overseas factories' companies run in China. BMW's and VW's certainly were.

Not sure that Canada really has a huge number of ex-pats or temporary secondment people running Canadian-owned factories in China. Private citizens living there voluntarily are pretty low on the pecking order of being plucked to safety, having personally chosen to live there. Our Lord and Massa harper rescued thousands of Lebanese Canadians when they suddenly remembered they had dual citizenship when it came down to brass tacks.

And China is officially cheesed off mightily at Canada so is hardly smoothing the way for an official Canadian rescue plane -- we've (our billionaires that is) recently revived Chretien from somnabulent retirement to head a mission to cuddle up to Xi, because Trudeau would be no good at it, nor the execrable Freeland, still preening at being persona non grata in Russia.

Of course, there is a political statement made when any given country rides in on a white charger to rescue its "own". It's essentially flippin' the bird to China, excoriating them for their ways. Imagine how we'd feel if the positions were reversed and everyone and thir dog sent in planes to rescue citizens from those amateur Canucks. In this case, there seems a fairly solid chance that the source of the coronavirus was wild animals kept alive for sale to consumers in markets. So there may have to be a change there. Who knows?

The overkill was sending in a German armed forces plane for this latest lot of citizens. One supposes it bypasses reluctant charter airlines, but the precautions themselves aren't overkill, because the people who remain have a slightly higher chance of carrying the coronavirus than those who got out on earlier flights. If you can take effective precautions on the offchance, why not do it? Because nobody seems to have much clue about how this virus infects a human from one to another, other than that it does.