Teck Resources Walks on Frontier Mine 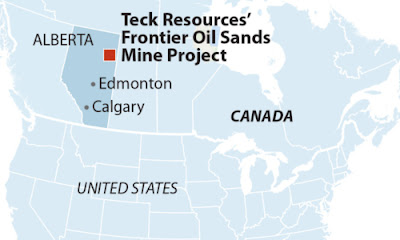 Even the oil patch is crying "uncle" on the Athabasca Tar Sands.

Teck Resources has pulled its application to develop a mammoth open pit bitumen mine, the Frontier mine project. The company's press release cited climate change for walking away from the Tar Sands.


“The growing debate around this issue has placed Frontier and our company squarely at the nexus of much broader issues that need to be resolved,” said company president and CEO Don Lindsay in a letter to federal Minister of Environment and Climate Change Jonathan Wilkinson, posted online Sunday night.

“In that context, it is now evident that there is no constructive path forward for the project.”

So the mine is off, what does that mean? For starters it means we won't be needing 260,000 barrels a day of pipeline capacity. Among other things that may undermine Trudeau's Folly, the Trans-Mountain pipeline expansion.

Needless to say, the announcement didn't sit well with the Alberta tyro, Jason Kenney, who wasted no time blaming Trudeau as he ran through the halls of the legislature crying "wexit, wexit, wexit."


Supporters of the pipeline pointed to the thousands of jobs it was expected to create. Alberta Premier Jason Kenney has pushed for its approval, positioning it as an issue of national unity amid increasing discussion about Western alienation.

In a press release, Kenney blamed Teck’s decision to pull the application on the Liberal government’s “lack” of “courage” in defending the “interests of Canadians in the face of a militant minority” ⁠— a statement that contrasts with Teck’s public explanation.


Lindsay said investors and customers are now demanding government policies that reconcile the need for urgent climate action with resource development, something that "does not yet exist" in Canada, the letter said.

Lindsay’s letter said Teck supports stricter climate policy, including a carbon tax and a cap on oilsands emissions, two measures Kenney has pushed back against. (Alberta’s previous government passed an emissions cap on the oilsands, it hasn’t yet been implemented.)

"The promise of Canada’s potential will not be realized until governments can reach agreement around how climate policy considerations will be addressed in the context of future responsible energy sector development," the letter said.

"Without clarity on this critical question, the situation that has faced Frontier will be faced by future projects and it will be very difficult to attract future investment, either domestic or foreign."

Teck, born again climate activists?
Something smells and it's not the methane.

Kenny is dissembling as usual.

But the media is helping him of course. CP is one of the better headlines

should be
Teck withdraws application for Frontier mine, citing lack of climate change policy in Canada

We are pariahs ... even the FF industry will not have us on their dance card.

.. 'how can we sleep while our beds are burning'

Hardly breaking news - Dark forces - Dark times are upon us in Canada Eh ?

Maybe the 'Daily Price of Oil & Gas' needs to simply become the Headline of every damn newspaper, or associated website or Tweet from Mainstream and Indy Media in Canada. Maybe it should be on the front of every podium used by Political Parties in Canada ? You know, instead of 'For The People' or other cheap Potemkin Propaganda slogans. The Daily Price Of Oil & Gas seems to be the guiding light & roadmap of Political Parties and Greed these days.

Alberta and British Columbia dominate the 'news' currently, plus Ontario's Mohawk barricades and the Dough Ford Stephen Lecce wrestling tag team buffaloing of Educational exemplars, Teachers, their unions and students. Seemingly, the Media who less resemble the canary in the coal mine or even a bird dog.. have simply become the proverbial 'dog that don't hunt'.. it just snivels

Canadians foolishly falling all over themselves on behalf of or because of Captured Political Parties are being self herded somewhere with timely chousing & chirping by sold out partisan media cowpokers. Its well on its way to being the national sport, the national bad dream. The end destination seems a spinwheeling brief freefall with fatal hard landing from the lip of Head-Smashed-In Buffalo Jump, Alberta.

The real 'canary in the oil mine' currently is the Wet'suwet'en Peoples and Aboriginal Title.. Why ? How ' What ' Who ? The W5'er in the ten gallon hat.. Alberta's 'Governance' and Federal Romance with Fossil Fuel - Petroleum Superpower fairy tales and the unicorns plus Tinkerbell.

Canada is being fracked and mined .. face it. Any sense of Canadian Values, Ethics, Coherence is being hollowed out from underneath, leaving not a thin veneer, but a mere floating 'sheen'. Do we have to accept that BC will be swept by more, more and more Bitumen and Gas for export from the coast to Somewhere ?? Do we as Canadians accept that 96% of OUR vaunted 'Oil' Reserves are Alberta Biutumen. ? Or that the methane, propane, butane, pentane of just The Montney Formation gas fields of Alberta and British Columbia could supply Canadians domestic and rational export needs for an estimated 125 years ? But essentially all of it must be exported from 'tidewater' - the BC coast. What does that tell us ? What does it tell the population of British Columbia, or Alberta ? Or the rest of Canada ?

Evergrowing Economy - my ass ! Nation Building - bullshit ! Aboriginal Title will be overrun by taxpayer subsidized Pipelines headed to 'tidewater', Superports for Supertankers. And what if, just if.. at the same time, that same 'tidewater' to Asia's 'wealth' that thrills political animals was seen by millions of climate refugees, migrants from overpopulated nations or regions such as Asia, escapees from drought, floods, fires, crop failures, disease and pestilance, war torn countries & their factional religious persecution or corruption.. What if they see that same West Coast meridian from the opposite & approaching view.. as shoreline.. ??? Flooding American coastal States, BC, then Alberta & the prairies first then diffusing into Ontario & headed east ?

The money-men have spoken. When JP Morgan and BlackRock say 'no mo money' for Tar Sands bitumen finding the sort of cash that Teck needed for Frontier was a truly Herculean chore.

Jason is left to scowl and stamp his feet but I'm sure that even he could see the writing on the wall. He'll blame everyone from the eco-terrorists, to foreign meddling to Ottawa's betrayal because the wee churl doesn't have many options.

One thing we won't hear from Kenney is loose talk about site remediation for Alberta's thousands of orphan wells and especially for the Tar Sands tailing ponds. At least not unless he wants to trigger a stampede of money out of the Wild Rose.

It's so sad because he got to wear the big hat and everything but it didn't last. Oh dear.