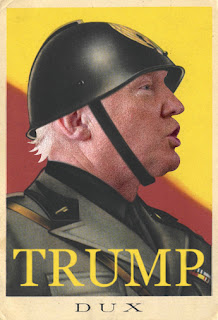 You tell the truth about Donald Trump and it'll cost you. There was plenty of that today as the Mango Mussolini, reveling in his staged impeachment acquittal, took his revenge on those whose sin was that they wouldn't lie for him.

First to go was Colonel Alexander Vidman, purged from his job on the National Security Council. His twin brother, Lt. Col. Yevgeny Vidman, was also shown the door. Both Vidmans were escorted to the White House door by security and told not to come back. Classy. Next up was now ex-ambassador to the EU, Gordon Sondland.  Like Vidman, Sondland gave evidence before the House impeachment committee that Trump had used hundreds of millions of dollars in military aid to shake down the Ukrainian government into investigating Joe Biden and his son.

Snitches get stitches, bitches. Oh well, it could have been worse. At least they didn't wind up like Epstein.

Trump is said to be cleaning house at the National Security Council to shape it more in his image - smaller, less capable, compliant.  The New York Times suggests the purge is just starting.


The ouster of the Vindman brothers and Mr. Sondland may only presage a broader effort to even accounts with the president’s perceived enemies. In the two days since his acquittal in the Senate, Mr. Trump has railed about those who stood against him like Speaker Nancy Pelosi and Senator Chuck Schumer of New York, the Democratic leader, calling them “evil,” “corrupt” and “crooked,” while his White House press secretary declared that those who hurt the president “should pay for” it.

Sort of like Stalin, only without the Makarov pistol and the bullet behind the ear.
Posted by The Mound of Sound at 5:12 PM

California should be ramping up investment in ocean-desalination technologies, while New York ramps up investemenet in greenhouse agriculture . . . then they both secede. I suspect there are several other states that would join them.

I didn't think that anyone could be more petty-minded than the bosses at Bechtel until I saw what Trump did to the Vindman boys. Did anyone in America see the cowardice and servility in that room of his admirers when he gave his victory speech? What a spectacle. How many years did it take to put together such a massive assembly of suck-ups? The Republicans are providing the world with a clinic in political gutlessness. I don't think I could ever be in the presence of any of these jelly bellies without breaking out in laughter.

Anon, I think there is a real question of how much strain the American nation state can take before it fractures. For years Chris Hedges has maintained the US to be in a "pre-revolutionary" state. When you look at the health of its vaunted system of checks and balances and find a "stacked deck" supreme court, a "bought and paid for" Congress in service to narrow interests over the public interest and a criminal presidency freely corrupting the office and the national government one has to ask if American democracy can ever be restored through the ballot box. From election meddling by adversaries through social media to the traditional scourges of gerrymandering and voter suppression and the legitimizing of corporate money in elections (Citizens United) the forces arrayed to prevent free and fair elections are overwhelming. It doesn't help that you have a Democratic party unwilling to mention all of this.

John, you're right. It has taken years to weaken, confound, distract, and finally corrupt the nation state.

Several years ago I watched a segment of 60 Minutes that featured two Republican communications gurus who discussed voter manipulation and the art of manufactured consent. The example they used was the "Swiftboating" of John Kerry.

Kerry, of course, had commanded a Swift boat in combat on the rivers of Viet Nam. For his actions Kerry was awarded a Bronze Star and three Purple Hearts.

When Kerry ran for president the Repugs created Swift Boat Veterans for Truth. This group claimed that Kerry never won any of those awards and was, in fact, a coward. They included one member of Kerry's crew - only that guy had not been on the boat during any of the actions for which Kerry was honoured. The crew members who were there defended Kerry.

The Republican strategy was to create this group of nay-sayers and then take them on a skilfully crafted media campaign. These two Repugs said they launched it on "open-mouth" radio where you could say almost anything with impunity, the more outrageous the better. They got these guys on every talk show they possibly could to plant the seed of these falsehoods.

The second stage was the cable news outlets. FOX headed that group. After the story had "soaked" on the radio talk shows, it was introduced to the cable shows - Bill O'Reilly, Sean Hannity, etc., moving from there to outfits akin to Breitbart. The idea was to keep widening the circulation.

Days turned to weeks, on and on it spread. Finally the last bastion - America's mainstream networks and papers, repeated the story without vouching for its accuracy but that didn't matter. If it was mentioned in the New York Times or the Washington Post after it had been repeated so many times elsewhere before, it became truth in voters' minds.

Kerry's acts of heroism under fire were turned on him and used to discredit him. It worked. And these two guys were shameless about admitting what they'd done.

So you can trace the roots of this Repub juggernaut right back to Kerry's campaign. Since then the radical right - today's Republican party - has only gotten better at this corruption. They've become emboldened, willing to make outrageous statements in their legislatures, before the public, in the media. They don't blanche when they're accused of gerrymandering or voter suppression. Nothing shames them. All that matters is power - in office and over the American people.

God bless America. He sure has His work cut out for Him.

As one journalist observed to Senator Sherrod Brown, it's mystifying to see people who have no backbone walking around upright.

Hard to argue with that, Owen.