The Wisdom of Thomas Jefferson. 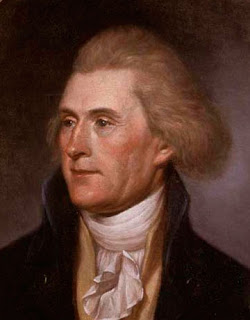 "The tree of liberty must be refreshed from time to time with the blood of patriots & tyrants."

With democracy in America failing (if it's not already dead), the American people should recall the days long before somebody like Donald Trump could be elected president.

Now that America has accepted an imperial presidency, what wisdom can be had from the founding of that nation?

What about Thomas Jefferson, author of the Declaration of Independence. He had a lot to say:

"Prudence, indeed, will dictate that governments long established, should not be changed for light and transient causes; and, accordingly, all experience [has] shown that mankind are more disposed to suffer while evils are sufferable than to right themselves by abolishing the forms to which they are accustomed. But, when a long train of abuses and usurpations, pursuing invariably the same object, evinces a design to reduce [the people] under absolute despotism, it is their right, it is their duty, to throw off such government, and to provide new guards for their future security."

"When patience has begotten false estimates of its motives, when wrongs are pressed because it is believed they will be borne, resistance becomes morality."

"Rebellion to tyrants is obedience to God."

"We are not to expect to be translated from despotism to liberty in a feather-bed."

"A first attempt to recover the right of self-government may fail, so may a second, a third, etc. But as a younger and more instructed race comes on, the sentiment becomes more and more intuitive, and a fourth, a fifth, or some subsequent one of the ever renewed attempts will ultimately succeed... To attain all this, however, rivers of blood must yet flow, and years of desolation pass over; yet the object is worth rivers of blood and years of desolation. For what inheritance so valuable can man leave to his posterity?"

"Postpone to the great object of Liberty every smaller motive and passion."

What would Thomas Jefferson have made of America's 'Great Orange Bloat' with his despotic ways?

Yes, now, I know there are those who can't wait to remind me that Jefferson was far from perfect. Yes, he not only had slaves he had his way with some of them. And he didn't really believe that business about all men being created equal. He didn't even believe that all white men were created equal. I've read Nancy Isenberg's "White Trash." I bought it, paid good money for it.  I know that stuff so, please, don't try to hijack this post.

Instead, treat yourself to a giggle:

It's gone. I'm trying to find some way to block this character on Blogger.