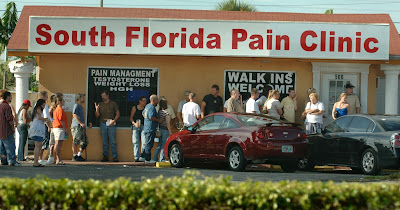 When North Americans began kicking the habit, Big Tobacco opened up new markets for their "cancer sticks" overseas, especially across Asia Pacific.  Now, Big Pharma, reeling from the pushback over opioids is looking to shop its deadly wares to the same tobacco-friendly markets abroad.


In 2016, nearly 50,000 people died of opioid overdoses in the United States, and, per capita, almost as many died in Canada. From 2000 to 2016, more Americans died of overdoses than died in World War I and World War II combined. Yet even these grim numbers understate the impact of opioid abuse, because for every person who dies, many more live with addiction.

This public health story is now common knowledge. Less well known is the growing risk that the epidemic will spread across the globe. Facing a backlash in the United States and Canada, drug companies are turning their attention to Asia and Europe and repeating the tactics that created the crisis in the first place. At the same time, the rise of fentanyl, a highly potent synthetic opioid, has made the outbreak even deadlier and begun to reshape the global drug market, a development with significant foreign policy implications. As a result, the world is on the cusp of a global opioid epidemic, driven by the overuse of legal painkillers and worsened by the spread of fentanyl, that could mark a public health disaster of historic proportions.


Opioids are widely misused for three reasons. First, clinicians can’t objectively measure pain in the way they can body temperature or blood pressure, so they rely on patients’ accuracy and honesty in judging pain severity. Second, opioids are highly prized, even by healthy people, because of the euphoria they create. And third, anyone without scruples can sell prescription opioids on the black market.

After several epidemics involving legal medications in the nineteenth century, in 1914, the U.S. government banned most distribution of opioids. For nearly 50 years after that, North America saw few opioid-related problems besides heroin use in a few U.S. and Canadian cities.

All of that changed in the mid-1990s. Several pharmaceutical companies began aggressively marketing opioids to treat chronic, not just acute, pain, claiming they carried little risk of addiction.  ...During the period of mostly uncritical enthusiasm for prescription opioids, the largess of manufacturers flowed to virtually every organization that should have been protecting the public, including health-care regulators, professional medical societies, medical school education programs, elected officials, patient advocacy groups, medical opinion leaders, and state medical boards.

A study by the Center for Public Integrity and the Associated Press found that from 2006 to 2015, the pharmaceutical industry spent $880 million on campaign contributions and lobbying state legislatures, 220 times as much as the amount spent by groups trying to limit opioid use. In 2013, the marketing expenditure of each of the ten largest phar-maceutical companies exceeded the entire budget of the U.S. Food and Drug Administration.

...
A key lesson of the current epidemic repeats one from the history of tobacco: legal drugs pushed by corporations can bring death on a scale vastly surpassing the effects of illegal ones. Calls to legalize recreational opioids that fail to grapple with this reality do not deserve to be taken seriously.