And Now, Just a Few Words, "In God We Trust" 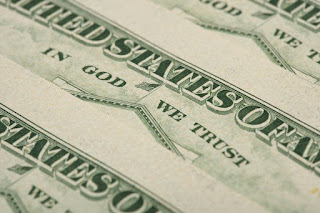 In 1776, America's founding fathers proclaimed that the official motto of their freshly minted United States would be "E Pluribus Unum" or 'out of many, one.' Let's not clutter this up with awkward issues such as slavery or the 'white trash' syndrome. It was a noble thought. We're all in this together. We are as of one.

E Pluribus Unum lasted for 180 years, a good run in any country. Then, in 1956, it was retired to make way for "In God We Trust." Gotta get the Great Father in there - white, respectable, mom's apple pie sort of thing. It was all Dwight Eisenhower's idea. He wanted America yoked to religion although it didn't much matter to Dwight which religion that turned out to be. Eisenhower thought that embedding a little more religion in the public consciousness would make for a better, more loyal, less unruly populace.  Boom, the pews were full on Sunday morning as they had never been before. And the radical religion of the far right was inducted into the inner circle of power.

Post-war America has been no E Pluribus Unum country. That "all for one, one for all" business didn't fit capitalism on steroids. And in a society so deeply divided across so many fault lines - political, economic, ethnic and cultural -  that "unum" business is pure crap. Besides, In God We Trust is at once benign and yet so enduringly flexible. It has that Wehrmacht belt buckle "Gott Mit Uns" quality to it. God is with us, we are God's chosen. Hence, God delivers endless bounty in good times and in bad times there's the "Jesus, take the wheel" flip side.

Will America ever emerge from the current 'Jesus take the wheel' mode? Not as that nation is currently constituted and at some point we'll have to figure out how to live with that.

I'd known about the 'in god we rust' stuff from the 50s.
I did not know the backstory of what it replaced.
Nice knowledge nugget.


as for
"at some point we'll have to figure out how to live with that."

or live under it. (I am not as optimistic as Margaret Atwood.)

You're a self hating white, Mound.

Just returned from the sun in the US, mound and had an interesting conversation with a relative (Canadian) who is part of the evangelical crowd and attends a Southern Baptist Church down there (this is a church approved by the one he attends in Canada).

He was very concerned that the local preacher, in his sermon, waded into the word "socialism" and although he was very careful in how he couched his warning, he nevertheless warned the congregation to be "very aware" of that word when they heard it during this years Presidential election.

The whole issue of separation of church and state and the reasoning behind why churches were not subject to paying any taxes on their income, and yet, here is this preacher he has been listening to about the glory of Jeebus, etc, now getting into politics in his sermon.

Apparently right wing politicians have no problem with churches getting involved in elections and are still very comfortable with the tax-free status of all churches.

A 'self-hating white'? Odd that you bring colour into this, Anon. Shouldn't you be at a cross- burning somewhere?

You can guarantee that when that God guy turns up ( he is usually male) then we are sure to have problems both big and small.
That in the USA, 1956, chose God to guide them instead of commonsense should have alerted the world to a potential problem.

Let's face it the world has succumbed to the "almighty" dollar.

The second link in this post takes you to Kevin Cruse's recent book, "One Nation Under God," that explores how, as a result of FDR's New Deal, conservative industrialists bonded with fundamentalist preachers to push back against Roosevelt's godless socialism. What began in the post-Depression era is still alive and well today. It has progressed from Sunday night radio broadcasts by fundamentalist preachers into the televangelists of today who can shamelessly and with seemingly total immunity from prosecution dupe and defraud their gullible followers so long as they can deliver that flock to the ballot box.

Chuck Thompson, in his book, "Better Off Without 'Em," looks at how fundamentalist mega-churches across the south perpetuate segregation. Whites go to white churches, blacks to black. These churches, in turn, operate charter schools for parishioners. Hence white kids are segregated from black kids. Religion immunizes these schools against the sin of segregation. Neat trick.

Oh yeah, Anon, in case your "self-hating white" slur arises out of my "white trash syndrome" reference, you should at least follow the link. It leads to a review of Louisiana U prof, Nancy Isenberg's recent book, "White Trash, the 400 year untold history of class in America." In those days, poor whites from England were used as virtual slaves until they were displaced by the replacements from Africa. It's a fascinating history, something you could deeply benefit from learning..

TB, I recall dealing with a couple of fraudsters who belonged to a Christian businessmen's association. Someone told me when you came up against them you knew that the devil held them tightly by both lapels. I learned that was pretty good advice.

I asked one of these guys who bilked some naive people out of serious money why he tithed to some evangelical outfit. I was floored when he volunteered that he relied on them every Sunday to absolve him of the previous week's sins. He didn't even seem ashamed of admitting that. Psycho? I think so.

Lulymay, the comment beginning with "The second link..." is in response to yours. I forgot to add your name to it.

Evangelical Christianity is now permanently and deeply embedded in American politics. There is no separation of church and state. That slipped away starting around 80 years ago.

Andrew Bacevich, retired US Army commander turned academic, has written extensively on how the evangelicals have become an integral part of the modern military/industrial/neoconservative/commercial warfighting/evangelical complex. He details how it is, in all but name only, the official religion at the US Air Force academy. It's pretty eerie stuff.

You might remember back to 2003 when Lt. Gen. William Boykin got up on stage and told one (one of many) church audience that America was at war with Satan before adding "you know what I knew, that my God was bigger than his. I knew that my God was a real God and his was an idol."

Rumsfeld rejected criticism of Boykin calling it a "private affair" even though the general always appeared in full dress uniform replete with his medals.