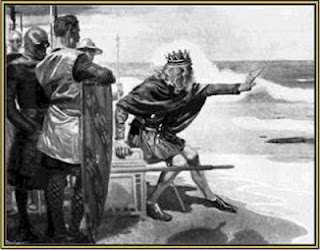 For 15 years or more I've been following how Americans respond to the issue of climate change. It's about as politicized an issue as any I can recall. The Repugs have been a million shades of angry denial. The Dems, perhaps fearful of upsetting the voting public, have not always been that much better.

One inescapable truth was that, sooner or later, reality would prevail over partisan political bullshit. That's physics for you. There's no way to get around it. Even King Canute knew better.


Canute set his throne by the sea shore and commanded the incoming tide to halt and not wet his feet and robes. Yet "continuing to rise as usual [the tide] dashed over his feet and legs without respect to his royal person. Then the king leapt backwards, saying: 'Let all men know how empty and worthless is the power of kings, for there is none worthy of the name, but He whom heaven, earth, and sea obey by eternal laws.'"

Now Republicans aren't as smart as King Canute. They've got about as much grasp of climate change in all its dimensions as my dog and he knows, when the tide comes in, to move higher up the beach. But that may be about to change.

Repugs, especially along the southeastern seaboard and the Gulf coast, are finally coming to grips with sea level rise. It's a problem, especially as the east and Gulf coasts are subsiding as the seas keep rising. A piece in the Washington Post claims Republicans are coming out of the "climate closet."

What they've also come to realize is that the public is coming around on the dangers of climate change and there'll be a price to pay at the polls if they don't change their attitude and introduce climate policies. Those angry old white folks are just going to have to bite it. Their days are just about over.

That doesn't mean Congressional Republicans have "seen the light." They haven't, especially when it comes to funding climate action. There'll be no carbon taxes for them, not yet anyway.

A new paper published by PLOS/ONE maps how Americans will retreat from the sea and where they'll relocate.  Obviously they'll be heading inland. America's IDPs - internally displaced persons. 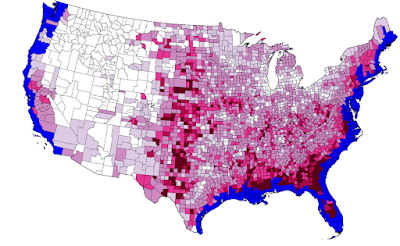 “A lot of cities not at risk of sea of level rise will experience the effect of it,” says Bistra Dilkina, a computer scientist at the University of Southern California, who led the study. “This will require an adjustment in terms of the [increased] demand on the cities’ infrastructure.”

Dilkina and her team used migration data from the Internal Revenue Service to analyze how people moved across the U.S. between 2004 and 2014. Movement from seven Katrina and Rita-affected counties to unaffected counties between 2005 and 2006 was categorized as climate-driven migration. Researchers then combined that analysis with National Oceanic and Atmospheric Administration (NOAA) projections on the effects of sea level rise on coastal counties, and trained a machine-learning model to predict where coastal populations will move when forced to leave their homes—and how that, in turn, affects the migration of non-coastal residents.

The authors conclude that many of the displaced people will try to relocate to nearby cities, to stay as close as possible to everything they had to leave.


...cities closest to the flood-prone areas, and that aren’t typically attractive destinations for newcomers, could see a higher-than-average influx of migrants. In Florida, for example, that means people may increasingly move to the shrinking core of the peninsula as the coastlines disappear into the ocean. Demographer Mathew Hauer, whose climate migration research was a building block for Dikina’s, explained in Audubon Magazine that people tend to move to familiar places nearby, where they might already have friends, family, or some other support network. People may also flock to major urban centers like Dallas and Houston, which the model predicts will absorb the most migrants, and drive up the pace of urbanization.

There'll be a process of "climate gentrification" as displaced newcomers settle into towns and cities, in turn displacing the poorest residents.  But, for many, moving inland won't be much of an answer. It may be out of the frying pan but into the fire.


For one thing, sea level rise is just one effect of climate change. Heat waves will drive people north—and could make make cities like Duluth and Buffalo “climate havens.” Urban flooding will reshuffle populations within a city. And extreme storms will move people in yet other ways. Meanwhile, as in Paradise, “forest fires are going to have dramatic effects on the West Coast, including the Pacific Northwest,” says Keenan. “All of those things are changing land economics, housing economics, and public finance.”

And, of course, you can't take it with you. For most Americans, the house is their major asset. A lot of those buildings will be abandoned. People have to start over. That's doable when it's an isolated problem. When it's whole neighbourhoods, entire counties, that's far tougher.  Severe storm events of increasing frequency, intensity and duration; droughts and floods, heat waves, the loss of groundwater resources - it all adds up to a migration north. (Hey, the Euros are onto this too. The Scandinavians foresee their Baltic beaches becoming the next big resorts replacing the Mediterranean getaways.)
Posted by The Mound of Sound at 1:34 PM