An Open Letter to Bill Barr - "Be Gone" 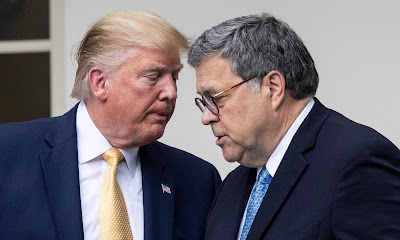 They also urged current government employees to report any signs of unethical behavior at the Justice Department to the agency’s inspector general and to Congress.

“Each of us strongly condemns President Trump’s and Attorney General Barr’s interference in the fair administration of justice,” the former Justice Department lawyers, who came from across the political spectrum, wrote in an open letter on Sunday. Those actions, they said, “require Mr. Barr to resign.”

Even as the lawyers condemned Mr. Barr on Sunday, they said they welcomed his rebuke of Mr. Trump and his assertions that law enforcement must be independent of politics.

But Mr. Barr’s “actions in doing the president’s personal bidding unfortunately speak louder than his words,” they said.

Has he come close to violating any professional standards?

.. People should invest 15 minutes to study this distorted specimen William (Bill) Barr. His obvious off planet 'religious beliefs' may prove useful by pointing curious, interested or truly concerned Canadians to closer inspection of many Canadian political animals.. elected or unelected but in positions of power and influence.

Look at Jason Kenney for example. Rather than be a publically stumbling christian buffoon like Andrew Scheer, Jason Kenney obscures and masks his 'religious beliefs' aka ideology. Yet I suspect Kenney and Barr are actually identical in their hard wired distorted faith based ideology. But what attracts or reassures simple minded American voters is quite likely to frighten most Canadian voters. Harper drilled this into all his disciples.. its better to lie and conceal.

Well, John, when 1,100 former federal prosecutors and DoJ officials, Republican and Democrat, sign an open letter calling for your resignation that's a pretty good indication that yes, you've crossed the line - so often that the line has almost been erased.

Think Flynn, think Stone, think how he sought to edit the Mueller report, think of how he "investigates" every one that Trump singles out, inevitably people who caused trouble for Trump's Russian posse.

Just in time for election season Barr is serving up whatever Trump wants to support his victimization, his martyrdom. His base eat that shit up and then raise high their empty bowls, chirping "might I have another?"


Gawd knows, I don't want to add to the woes of the Roman Catholic church but I agree that there are signs Jason never really left the seminary and Barr has always been a religious hard-liner.