Rush Limbaugh - One Smoke Over the Line

He's the dean of open-mouth radio, widely loved by American nativists, xenophobes, racists, misogynists and garden-variety bigots and just as widely deplored by everyone else. 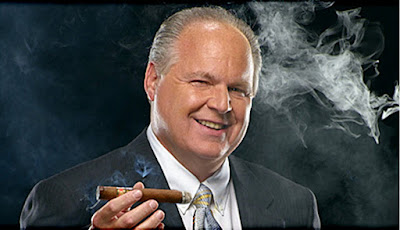 Rush Limbaugh, whose signature prop was a big fat stogie, told his audience today that he has advanced-stage lung cancer.

Along with Bill Cosby, Limbaugh has even graced the cover of Cigar Afficionado. 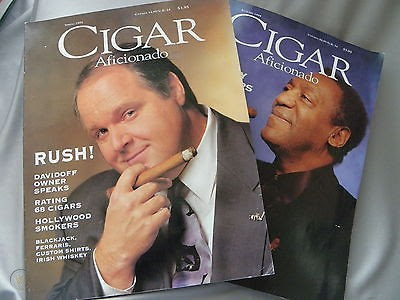 I don't wish him ill but, then again, he's taken care of that himself.

On his radio show, news about the homeless has often been preceded with the Clarence "Frogman" Henry song "Ain't Got No Home." For a time, Dionne Warwick's song, "I Know I'll Never Love This Way Again" preceded reports about people with HIV/AIDS. These later became "condom updates" preceded by Fifth Dimension's song, "Up, Up and Away". For two weeks in 1989, on his Sacramento radio show, Limbaugh performed "caller abortions" where he would end a call suddenly to the sounds of a vacuum cleaner and a scream. He would then deny that he had "hung up" on the caller, which he had promised not to do. Limbaugh claims that he used this gag to illustrate "the tragedy of abortion" as well as to highlight the question of whether abortion constitutes murder. During the Clinton administration, while filming his television program, Limbaugh referred to media coverage of Socks, the Clintons' cat. He then stated, "But did you know there is also a White House dog?" and a picture of Chelsea Clinton was shown. 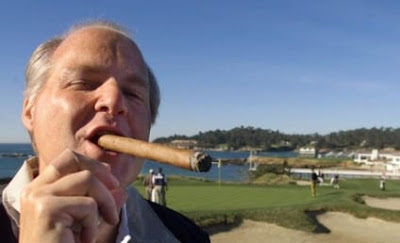 Wonderful thread.
Today I listened to Lars Larsen on US right wing radio.
He said.
I don't think that Rush smoked; then followed this by saying just because you smoke does not mean you get cancer!!
People who get cancer who have never smoked!!

I could not have happened to a nicer ! guy.
I retract that.
He is a prick, the worst of the worst.
Problem is , he has 13 million listeners.

They, the Repugs are going to demand a friggin state funeral for this low life when he eventually gets his just rewards.

Wow! Having never listened to him, I was totally unaware of the depths he sank to on his program. Truly, a man of the American people, eh?

The USA opinion of him.

From the comments on The Hill

Thoughts and prayers, Rush. On the upside, I'm sure there's plenty of Oxycontin in the palliative care unit.

Not to mention the stash of Viagra he used to carry around , but that was to countries with 'relaxed' child care regulations!

He's a genuine bag of dirt, to be sure. But there'll always be plenty lining up to take his place.

.. I think Cap about covered it thanks ..

I remember well the “Barack, the magic negro” song played repeatedly on his show soon after Obama’s election. Right around that time his contract was renewed for eight (coincidence?) years at fifty million per. Like him or not, he certainly inspired many a copycat, even here in canuckland. One aspect of his schtick that I found amusing was is oft repeated phrase “Don’t try to figure out politics on your own; just listen to my show and I’ll tell you what to think.” I guess he knew his audience. Mac

He ain't worth even a single drop of schadenfreude

Limbaugh is an old disc jockey who outlived the Pop 40. Sounds like time has finally caught up with him.

Meanwhile ... on the eve of his glorious, exonerating acquittal tRump will warm the hearts of the world with his folksy SOTU while his approval ratings climb and exceed most of the former incumbents of the same office.

And those damn Ruskies are at it again in Iowa!