Boogaloo - There's a word I haven't heard in a long while. 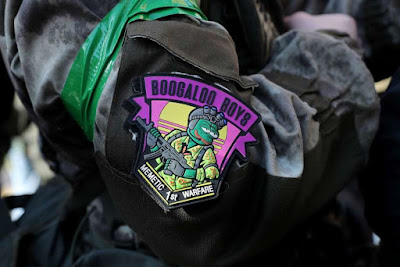 Whatever it once meant back in the 60s or 70s, Boogaloo has become the brand of a rightwing extremist movement said to be flourishing in the United States.


The group agitates for another civil war and advocates for a campaign of violence against liberal politicians and law enforcement. Boogaloo was hatched online. A former New Jersey attorney-general now lecturing at Rutgers calls it "a breakthrough case study in the capacity to identify cyber swarms and viral insurgencies in nearly real time as they are developing in plain sight."

U.S. law enforcement officials and researchers at various levels have issued warnings about the growing threat posed by domestic extremists motivated by fringe ideologies and conspiracy theories. Joel Finkelstein, NCRI's director and a research scholar at the James Madison Program at Princeton University, said the report had been sent to members of Congress and the Departments of Defense, Homeland Security and Justice, among others.

Paul Goldenberg, a member of the Homeland Security Advisory Council, said the report was "a wake-up call."

"When you have people talking about and planning sedition, and violence against minorities, police, and public officials, we need to take their words seriously," said Goldenberg, who is also CEO of the security consulting company Cardinal Point Strategies.

Goldenberg said the report had "gone viral" within law enforcement and intelligence communities since its limited release last week. People are reading it and distributing it "far and wide," he said.

The movement, such as it is, has shown an uptick in activity in recent months.


In the last three months, boogaloo-related conversation has grown rapidly, according to the researchers, who found that use of the term has increased nearly 50 percent on platforms like Reddit and Twitter over the last few months. Increased exposure, the researchers warn, carries the danger of indoctrination.

Boogaloo extremists have used social media to "strategize, share instructions for explosives and 3-D printed firearms, distribute illegal firearm modifications, and siphon users into encrypted messaging boards en mass," according to the NCRI report. The report also notes how the boogaloo concept has been monetized, through merchandise advertised through Facebook and Instagram ads, and marketed to current and former members of the military.

On Facebook and Instagram, the researchers pointed to several boogaloo-themed public groups and accounts with tens of thousands of members and followers.


Since NCRI generated the report last week, membership in several boogaloo groups on Facebook has nearly doubled, according to an NBC News analysis. During the same period, two of Facebook's most popular boogaloo groups that boasted nearly 20,000 followers are no longer available this week. Facebook did not return request for comment.

Much like the OK hand symbol coopted by white nationalists who later denied the association, the ambiguity of the term boogaloo works to cloak extremist organizing in the open.

"Like a virus hiding from the immune system, the use of comical-meme language permits the network to organize violence secretly behind a mirage of inside jokes and plausible deniability," the report states.

The term "boogaloo" has also been seen in real-world activism. At the Virginia Citizens Defense League's annual Lobby Day in Richmond in January, one group of protestors who go by Patriot Wave, wore Pepe the Frog patches emblazoned with "Boogaloo Boys." One man carried a sign that read, "I have a dream of a Boogaloo." The rally was held on Martin Luther King Day.

The boog is not about race or supremacy of any type. I would proudly boog back to back with a African American muslim drag queen if it meant more effectively yeeting corrupt cops and politicians feet first into The Wood Chippers of Liberty.

Well, Anonymous Ike, that doesn't seem to be the case although I'll let your comment stand. I'm sure "the boog" attracts more than extremists but that's not the point is it?