Is It Time to Expel Ottawa's Fisheries Department From Coastal BC? 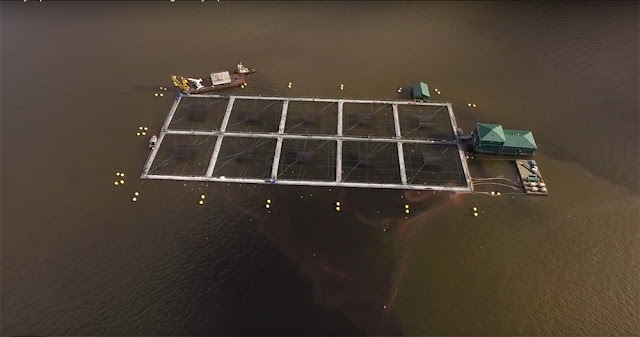 This is the same Department of Fisheries and Oceans that ruined the east coast cod fishery. Among their litany of outrages on the west coast are the fish farms where Atlantic salmon are raised in disgusting pens and spread disease to our wild salmon stocks.

In Vancouver Island's magnificent Clayoquot Sound 14 of 15 of the DFO regulated fish farms have tested positive for a highly contagious virus.


The report by Clayoquot Action, a Tofino-based conservation society, says feces, flesh and scale samples from 14 out of 15 farms tested positive for the piscine orthoreovirus, a disease that gained notoriety after a video of bloody discharge from packing plants in Tofino and Campbell River went viral in December 2017.

Laboratory testing by the B.C. government showed the underwater effluent was contaminated with piscine orthoreovirus, a disease found in 80 per cent of farmed Atlantic salmon that is linked to a host of fish health problems, including heart and skeletal muscle inflammation and haemorrhages in internal organs.

Four of the active farms the group tested are owned by Creative Salmon, the only company raising Chinook on a large scale in open net pen farms in B.C. Most B.C. open net pen operations — including 11 other active farms tested for the study, which are owned by Cermaq, a Mitsubishi subsidiary headquartered in Norway — produce Atlantic salmon, a species not native to the Pacific Coast.

“Wild Chinook salmon in Clayoquot Sound are on the brink of extinction,” Glambeck told The Narwhal.

The DFO dismisses the problem, saying it's a BC strain of the virus that has a minimal risk of spreading disease.  The tests prove DFO is, to give them the benefit of the doubt, wrong.


“They are essentially denying the existence of this Norwegian variant in British Columbia waters … It’s just shocking to me that they continue to deny that it is damaging and dangerous to wild salmon, pretending that it’s not happening.”

“This is similar to what my people — Indigenous people — experienced when we were given smallpox blankets,” Dorward told The Narwhal. “We were nearly wiped out. And I believe the same thing is happening to our wild salmon.

...
In 2018, the state of Washington announced that open net pen fish farms would be phased out by 2025. The state also stopped hundreds of thousands of salmon infected with an Icelandic strain of piscine orthoreovirus from being transferred to the farms, saying wild salmon could be at risk.

Yes. One wonders at times who controls our governments. It's certainly not we the people.

The same outfit owned by Mitsubishi is trying to open even more of these salmon fish farms in Nova Scotia beyond the many useless ones we already have. If you believe the propaganda BS, which not many do these days after the disasters we've had, nothing but sunny days are ahead. They don't do things by halves, they want to spend $500 million to put in 15 to 20 of these abominations.

Local fisherman are telling them to get lost in the area where I grew up. If you read this article from CBC, you'll find we have provincial control over aqauculture, and the Feds are not involved. But the article also says the Feds are kicking out salmon farms in BC by 2025. Did the CBC reporters get that wrong?

Fish it, mine it, log it then bugger off before the dust settles; that's the motto of big business and we fall for it every time.
Had we fished the resource properly there would be no need for fish farms but we have become greedy and selfish.
The same can be said for logging,mining not so much but they sure leave a lot of shit behind when they close.

.. I've been following this story - disease in BC salmon, wild and Farmed - for years, ever since Stephen Harper gained a majority government. I recall the early appearance of Alexandra Morton and her ecologicalyl concerned associates. At the time, I'm pretty sure fish farming was 'regulated' by the federal Ministry of Agriculture. That was all part of the Harper 'Uber Ministry' which encompassed, Environment, Resources, Fisheries & Oceans, Finance & Agriculture & essentially they truly began gutting any legislation that might impede rapid entrenchment of Big Energy. Remember the late saint, Jim Flaherty hosting his annual weekend 'Retreat' for Big Business leaders to give over their shopping list for Stepehn Harper to act on ?? I do. Remember also now, how Harper et al defunded the Small Lakes Experimental Station, muzzled scientists and biologists.. and that was just insult & sheer Harper mendacity. He had Ray Novak to delkver the word from on high to his feeble ass kiss Ministers

In my view, the advent of Justin Trudeau brought token, superficial PR level improvements.. even Potemkin level insults. Trudeau inherited the disgusting Harper legacy and has simply adapted to and adopted most of it. I believe Stuart Butts is a weak link who's buttons must be pushed by voters. If he cannot come clean, he needs to vacate OUR Government. Alberta and Jason Kenney pose a major problem to British Columbia

At what point does BC accept that in essence, they have to 'tear up the tracks' and start rebuilding. British Columbia is a sinking ship, unless it can start pumping out the political and Big Business bilges, repack the cargo and clean up rampant corruption and cronyism. Start by flushing the so called 'Liberal Party' down the toilet - its no more a 'Liberal Party' (whatever that is) than the cattle in our barn should be appointed to The Senate. Communities have to generate your elected MPL's and MP's.. not political monstrosities.

Get it on BC.. and tell Jason Kenney to mind his own stinking business and keep doing his 'Prayer Breakfasts' .. mebbe Jeebuz will listen to his fawpish smarty pants horseshite ideology..