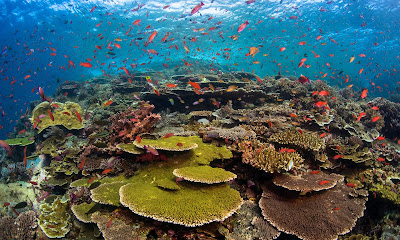 23 former foreign ministers have penned a joint letter urging world leaders to allocate a third of our planet to nature.


Humanity’s ongoing destruction of nature threatens the survival of our species, a group of former foreign ministers has warned, calling on leaders to step back from “the precipice” of irreversible ecological ruin and protect the planet.

The planet’s rapidly warming oceans must be the focus of increased conservation efforts due to their importance in producing oxygen and food for billions of people, the former ministers added, as governments prepare to begin negotiations for a Paris-style UN agreement on nature next week.

...“The loss and degradation of nature jeopardises human health, livelihoods, safety and prosperity. It disproportionately harms our poorest communities while undermining our ability to meet a broad range of targets set by the United Nations’ sustainable development goals. We must rise above politics and ideology to unite the global community around the urgent cause of protecting our planet and way of life,” reads the statement, which was released through non-profit thinktank Aspen Institute.

The former ministers highlighted the climate crisis, the “excessive exploitation” of natural resources, and ecosystem degradation as grave threats to international security, warning they “imperil the future for our grandchildren”.

“Humanity sits on the precipice of irreversible loss of biodiversity and a climate crisis that imperils the future for our grandchildren and generations to come. The world must act boldly, and it must act now,” the statement continues.

I don't know about you but it completely boggles my mind that we should have reached a point in human civilization where a group of former senior diplomats should feel the need to write, begging current world leaders not to destroy our biosphere. "Please don't kill everything." That's what they're trying to convey. Ask yourself how in hell did we come to this point? What have we become?

The "Let's-Free-Enterprise" guys and the mountains of cash supporting their propaganda certainly went a long way toward disabusing the public of any quaint notions about ZPG that might have begun to take hold in the post-WWII period. Progressives failed to identify and label market libertarianism as the extremist scam that it always has been. They still haven't.