Who Is Pitching "De-growth"? The Harvard Business Review 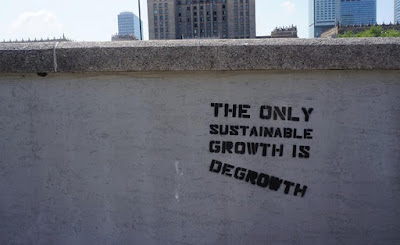 At some point, we'll realize the GDP-Growth Club is about as ridiculous as the Flat Earth Society. The big difference is one is inherently nihilistic, while the other is populated by people who wear tinfoil hats.

The GDP brigade with their fetish for perpetual exponential growth as the solution to all our problems includes every government in Canada, provincial and federal. Ditto for governments across the developed world and the emerging economies. It's part and parcel of the neoliberal model they embrace.

It came as a bit of surprise to find an article promoting "de-growth" in the pages of the Harvard Business Review. The article is written by two business profs, Bothello (Concordia) and Roulet (Cambridge).


...with today’s the climate crisis, debates around degrowth have been reinvigorated, and many major figures such as Noam Chomsky, Yanis Varoufakis and Anthony Giddens have, to varying degrees, expressed support for the idea.

For others though — especially business leaders — degrowth is completely unthinkable, not least because of the anti-capitalist and anti-consumerist roots of the term. The prevailing view is that growth is an economic necessity, and any threat to that not only undermines business, but basic societal functioning. For instance, the CEO of H&M Karl-Johann Persson recently warned about the dire social consequences of what he perceives to be a movement of “consumer shaming.” Framed in these terms, the resistance of multinational CEOs and entrepreneurs alike is predictable, as is the reluctance of politicians to promote degrowth policies that would potentially prove unpopular with key constituents. The economist Tim Jackson provides a concise assessment: “Questioning growth is deemed to be the act of lunatics, idealists and revolutionaries.”


First, given the finite nature of our planet, infinite economic growth — even of a different variety — is a logical impossibility. Secondly, innovation and improvements produce, in many cases, unintended consequences. One of which is the Jevons paradox, where individuals compensate for efficiency through increased consumption. For instance, more energy-efficient refrigerators lead to more refrigerators in a home.

The third and most fundamental issue is that the degrowth movement has already begun: at a grassroots level, consumer demand is actively being transformed, despite political and corporate reticence. A recent YouGov poll in France highlights that 27% of respondents are seeking to consume less — double the percentage from two years prior. The number of people eating less meat or giving it up altogether has been rising exponentially in recent years, too. Similarly, the movement of Flygskam (literally “flight shaming” in Swedish) has had early successes in reducing pollution: 10 Swedish airports have reported considerable declines in passenger traffic over the past year, which they attribute directly to Flygskam.

As one door closes, another opens.


Flygskam has been a boon for train travel, bolstered by a social media movement called Tågskryt (“train brag”). Meanwhile reduced meat consumption has been accompanied by an explosion in meat substitutes that produce one-tenth of the greenhouse gases compared to the real thing. Accordingly, degrowth reshuffles competitive dynamics within and across industries and, despite what many corporate leaders assume, offers new bases for competitive advantage.

The authors identify three strategies for business to adapt.

Second, firms can engage in value-chain repositioning, where they exit from certain stages of the value chain and delegate some tasks to stakeholders. (I really don't understand this one)

Third, firms can lead through degrowth-oriented standard setting. This entails creation of a standard for the rest of the industry to follow. The apparel company Patagonia — that explicitly follows an “antigrowth” strategy — is the poster child for this philosophy, offering a worn-wear store and providing free repairs for not only their own products, but also for those of other garment manufacturers. Walmart and Nike have solicited advice from Patagonia on such practices, and more recently H&M imitated the service with a pilot in-store repair facility. In a similar vein, the automobile company Tesla released all its patents in 2014, seeking to catalyze the diffusion of electric vehicles. Such initiatives were not merely marketing ploys, but also strategies to standardize a practice or technological platform throughout an industry — one in which companies like Patagonia or Tesla would have existing expertise.

Until now, consumerism has been driven by the markets. It may be time for consumers to take the whip hand, transforming the markets to conform to a fast changing world. The sooner the better.

Hell must have frozen over. I never thought I'd see the day when the Harvard Business Review did not sing the praises of growth.


We're reaching the point at which we have to confront the unthinkable, Owen. At the core of neoliberalism lies an unquestioning belief in perpetual exponential growth which, given our entirely finite planet, is, as the authors write, a "logical impossibility."

Imagine an entire political-economic ideology that has swept through every country on Earth that has, at its roots, a blatant falsehood. Yet here we are.

We're trapped in a "not just yet" mentality. Even the CEOs of the oil giants know that, at some point, we have to ditch fossil fuels. Just not yet.

Good luck with that concept. The people promoting these ideas need to get a reality check. We live in a society based on buying new stuff, all the time. New and improved is the slogan of the day. Repairable phone? Who cares? We must have the latest IPhone, to hell with that old outdated one. Clothes that don’t fall apart after a few washes; interesting but who cares. Fashion industry will make that article something you wouldn’t be seen wearing in public after the new thing is now the norm. Seems the latest rage is jeans that come, brand new faded, worn, full of rips, holes, tears. I’ve seen, in my own neighbourhood, beautiful oak kitchen cabinets chucked into dumpsters in order to have the latest design. Gotta have granite or quartz countertops now. Formica? OMG! Even Corian, how passé! Many years ago, the big three car manufacturers were accused of programmed obsolescence. The cars, always in a different styling, would only last so long in order to get people to replace them after so many years. Well, we make better cars now, but the need for the manufacturers to keep selling new cars is still there or they are in serious trouble. No one wants wants to invest in a stagnant company. So degrowth might really help with our survival long term but it’s going to be one hell of a tough sell. Imagine a marketing strategy for that idea!! Mac

Almost every project on which I've ever worked, including scrubbers, filtration improvements, turnarounds or other such investments designed with a mind to lessening environmental impacts, has been related in some way to the growth model. The next paycheque factor can lead to a lot of stubborn resistance to any transition.

The problem, Mac, is that we're running into walls at almost every stage of the GDP roadmap - extraction/production/consumption/waste. It is a finite planet and that makes the very idea of perpetual exponential growth ludicrous or, as these profs put it, a logical impossibility.

Not only has global population tripled in the post-war era (2.5 billion when I was born, closing in on 8 billion today), but we've made significant improvements in longevity compounded by substantial increases in per capita consumption. Each of those three swells humanity's ecological footprint.

We have come to accept an annual 3% increase in GDP as normal. Yet the Earth hasn't gotten one bit bigger since they found Hitler's charred remains outside the Fuhrer bunker.

In the course of swelling our population numbers, extending our longevity and expanding our per capita consumption, we have inflicted ecological devastation on our one and only biosphere. Climate change, the stunning loss of biodiversity (especially insects, the pollinators), the collapse of both terrestrial and marine life (their populations have been halved over the last 40 years), the degradation of our stocks of arable land, it becomes a succession of blows. If you want to be a prize fighter it's not a question of whether you can take a punch but whether you can take a succession of hits and keep punching back. On that measure, we're a dead loss.


I can't argue with that, John. There's immense resistance to abandoning the neoliberal growth model. For most of us, it's all we have ever known. You would think Margaret Thatcher came down from the mountain carrying tablets. It is our orthodoxy.

JR Saul, in his book on globalism, illustrates that political-economic models are akin to religions. They're faith based. The false gawd of neoliberalism is increasingly obvious but we're not willing to move on.

That said we're running into walls. We will change, no matter how unwillingly, because we will have no choice. The 'Masters of the Universe' fable is shredding.

In Vancouver, we actually had a Degrowth org and events fro a few years.

To make matters worse, if/when we blow up our world wide civilizations we won't be able to rebuild them because we will have already used up all the easily accessed metals and other resources such as construction quality sand.

Correct me if I'm wrong but I think Japan has had a pretty flat economy for the past 20 years or more. There were all sorts of nasty predictions about what would happen but Japan is still there.

We did indeed imagine Japan was going to implode and face ruin, Toby. It seems that life does go on and quite well compared to most places. They are battling with a serious challenge but it's not GDP. They're facing a depopulation problem. Young Japanese are avoiding marriage and they're having fewer children. Now Japan's isolationist preferences are being dismantled to accommodate immigration. Who knew?

Thanks for the link, NPoV. I wasn't aware of this effort. I wish Vancouver had heeded their message back in 2010. It still would have been a shit show but nothing compared to what it is becoming today.