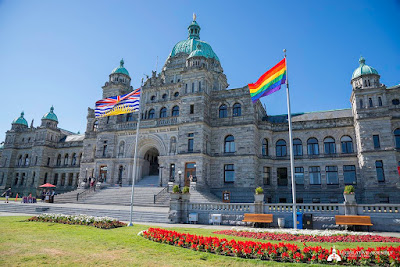 British Columbia's NDP government was deservedly proud of itself when, last November, BC became the first Canadian province to adopt the United Nations Declaration on the Rights of Indigenous Peoples. It was passed unanimously to much thumping and applause.

But, of course, that was last November. It's now February and not even the same year. Three months is a long time. Things change. Everyone knows that. It was all done with the best of intentions to be sure but, you know...

You see, everybody is getting hung up on Article 10 of the declaration:


Indigenous peoples shall not be forcibly removed from their lands or territories. No relocation shall take place without the free, prior and informed consent of the indigenous peoples concerned and after agreement on just and fair compensation and, where possible, with the option of return.

Everyone knows that no rule is ever really absolute. There have to be exceptions. Like pipeline companies, for example. Surely they have a superior competing interest, right? Just because there's a law saying something else doesn't make it so, eh?

The pipeline situation in BC seems very complicated to average consumer of news. It appears that the hereditary chiefs from 8 of 13 Wet’suwet’en tribes do not agree with the pipeline crossing their land even though all 13 elected councils agree. One of the hereditary chiefs is neutral and 4 of the positions ... are vacant? Vacant? How did hereditary chiefs gain their position in the first place? Was it like the kings of other nations? Through conquest?

I am all for supporting First Nations peoples but it seems like, in this case, a very few of the indigenous peoples involved are disagreeing with the many.

Anon, there's more to this. You can find what you need at The Tyee, the National Observer, or the Council of Canadians web site.

I am anon 4:55. I am fairly well read. Specific references would be helpful. (I would appreciate answers to my questions )

Now why did you have to go and bring that little bit of truth up? Oh, right it really is part of the issue, but you know its bad manners to embarrass them all like that doesn't you. O.K.

The Vancouver Sun has an article by Diane Francis tonight about the "indigenous radicals" and how its all Trudeau's fault and it could lead to session.

Politicians always like to do the "fun" stuff which makes them look good, but when it comes to profits or their political viability, it all goes out the window.
That is most likely why all these young people are protesting. they know they Indigenous People are always thrown under the bus when their rights need to be upheld. Indigenous young people have had enough. The federal government still hasn't cleaned up Grassy Narrows. Until governments clean up their acts and the drinking water of Indigenous people, no one, especially the young people are going to believe anything any government says.


We don't know how the Indigenous People really think because no one ever asked them. We do not see the press up there talking to them. I've seen two interviews and both were pro pipeline because they were getting jobs. Politics on reserves is very complicated and voting is some times done on the basis of family connections.

as to hereditary chief positions being vacant. Haven't checked but they might not have had kids or the children weren't interested or the children could have died. (higher mortality rate for Indigenous people than those of non Indigenous back grounds.) We also don't know what the process is with hereditary chief positions. It maybe clans or families have to make the decision.

The word hereditary doesn't necessarily mean what we think. The position is not necessarily inherited ; it can go to someone admired and trusted within the community.

anonymouse : I found the above fact in 2-3 minutes by Googling The Tyee and reading the article. Noone needs much help finding the info to which MOS refers.