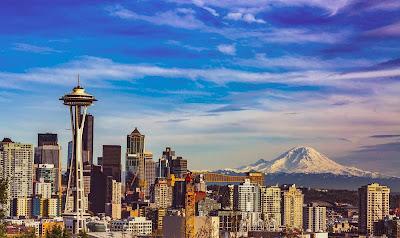 The Seattle Times seems pretty happy at how liberal their namesake city is becoming.  Seattle, by the way, has always been pretty liberal. It's an easy place to visit. It's just that it's a little more liberal now.


You might have thought there’s no way the Seattle area could get any more liberal than it already is. But according to new data, it appears that’s precisely what’s happened.

Twice a year, market-research firm Nielsen surveys hundreds of thousands of adults across the country about their political-party affiliation. The two surveys released in 2019 for the Seattle-Bellevue-Everett metropolitan division (King and Snohomish counties) show identification with the Democratic Party is at its highest point in the past 10 years.

In both recent surveys, 52% of adults in our area (a projected 1.25 million people) said that they are Democrats or that they lean Democratic. And keep in mind, that’s the percentage of the entire population age 18 and up, not just registered voters.


Republicans, or folks who lean Republican, number about 570,000 in our two-county area. That’s a little less than a quarter of the adult population. There are also 225,000 independents who don’t lean either blue or red, making up about 9% of the total. An additional 335,000 people in our area have a different political affiliation, or no affiliation at all. Most of these are folks not registered to vote, either by choice or because they are ineligible.

A few years back I was in Port Townsend, Washington, which puts Seattle to shame any day. I was in a pub. A couple at the next table started talking to me. They had just retired and moved to Port Townsend from someplace in the midwest. They wasted no time telling me they were ardent Republicans, very right wing. Apparently they had no idea that Port Townsend was so fiercely liberal until after they had bought and moved in.