And This, Kids, Is Why We Can't Have Nice Things 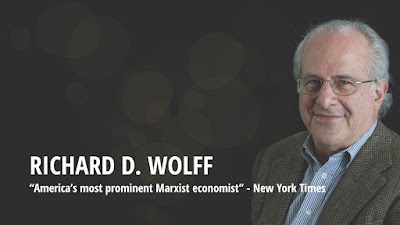 It's not just that governments don't tax enough. It's that they don't tax big incomes and big wealth nearly enough. Economist and professor Richard Wolff argues that modern global capitalism is theft on a massive scale.

In modern capitalism, governments routinely borrow money. They do this to finance budget deficits that occur when governments raise less in taxes than they spend. Governments also borrow to invest in long-term projects of economic development. The swindling occurs when the lenders and borrowers—usually private financiers and career politicians—negotiate loans that serve their own particular interests at the expense of the taxpayers who eventually cover the costs of repaying the government’s loans plus interest on them.

If governments raised enough taxes to cover their desired levels of spending, they would not need to borrow. Taxes imposed on the wealthiest corporations and individuals would be the most equitable strategy. The corporate wealthy protest, of course, threatening that if taxed, they might reduce their contributions to the economy (investing less, etc.). Most government politicians sympathize with those protests. Many come from the ranks of the wealthiest corporations and individuals (or aspire to join them). They share similar ideologies and depend on campaign donations from them. Compliant politicians typically exaggerate the negative aspects of taxing corporations and the rich. They rarely compare them to the negative effects of the alternatives: taxing middle and lower income people more or cutting government spending.

I can't quite explain it but I just keep coming back to a finance minister, a really rich guy, working for a trust fund boss, who blithely consigns the public to a future of "job churn." What was his name?


...
Deficit finance—the polite veneer for this swindle—deepens inequality in the United States and everywhere else it is practiced. It redistributes wealth from the mass of people (taxpayers) to the richest who “save” by means of lower taxes and then “invest” those “savings” in government loans. In transferring money from the many to a few, deficit finance operates like a lottery.

Keep these thoughts in mind when the major impacts of climate change arrive and we can no longer afford to ignore them. By then we'll be playing a deep game of "catch up" and the costs we have so successfully fended off will be far greater. That's when you'll see the PPP scam, the public-private-partnership game at full bore.

I know, I know - the photo identifies Wolff as a Marxist economist. Well, unless you've had your head buried in the turnip patch, you should know that a good bit of what Marx wrote and we angrily denounced for decades, is coming to pass.  Even prominent, mainstream economists such as Nouriel Roubini admit as much.

The zero-hour model works best for whatever it is that Morneau Shepell does for its share of the cake. If I don't really know what that is, I guess I can't expect that a guy like Justin would.