I guess it's a West Coast thing. Maybe it's the granola. The simple fact is that British Columbia is the best province in Canada. When it comes to health outcomes, if BC was a nation we'd be ranked third, a close third behind Sweden and Switzerland. We have a much better climate and an outdoors that seems to invite people outside whether it's sailing the coast, fishing for a salmon for dinner, skiing the mountains (Whistler, Blackcomb, all the rest), hiking the magnificent forests, trail riding on mountain bikes or just walking the beaches there's usually something to draw you outside.

There's an attitude, a vibe, out here on the left coast that's a bit different. Maybe it's the isolation of the multiple mountain ranges that sequester us. We're just more progressive. We have some fine progressive media outlets such as the venerable Georgia Straight, The Tyee and the surprisingly good National Observer. In a nation dominated by chains such as National Post, Bell/Globe Media and such, these indie papers are a very welcome breath of fresh air, even sanity.

There is an understated distrust of things east of the Rockies, especially governments, provincial and federal. We don't like getting steamrollered by "the east" which is pretty much everything from the foothills to the Ottawa River.

Maybe it's all of these things that explain why we're more sympathetic to protests whether it's to block a new coal port on the Fraser or First Nations standing against our government to defend the old growth forests of Clayoquot Sound, or the 1995 Shuswap/Secwepemc standoff at Gustafsen Lake. Does this sound familiar? 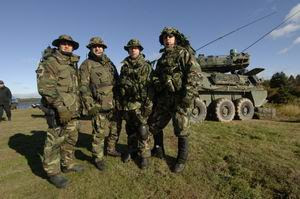 The Royal Canadian Mounted Police launched one of the largest police operations in Canadian history, including the deployment of four hundred tactical assault team members, five helicopters, two surveillance planes and nine Armoured Personnel Carriers. (the vehicle shown is not an APC but an AFV, an Armoured Fighting Vehicle of the sort we used in Afghanistan) The RCMP kept journalists well away from the site and some reporters became uneasy that the only side of the story being told was that preferred by the police.

On September 11, RCMP detonated an explosive device buried in an access road to the camp, heavily damaging a supply truck being driven by occupiers. The incident resulted in a firefight that made use of the military-loaned Armoured Personnel Carriers (APCs). Non-indigenous occupier Suniva Bronson was shot in the arm during the shootout and would be the only injury in the extensive exchange of bullets. On the following day, an unarmed man crossing a field designated as a no-shoot zone was shot at by police sharp shooters. Police later admitted to this mistake. The standoff ended peacefully on September 17 when the few remaining occupiers left the site under the guidance of medicine man, John Stevens.

By the end of the 31-day standoff, police had fired up to 77,000 rounds of ammunition, and killed a dog. One of the indigenous leaders claimed that at least one of the shooting incidents blamed on them in fact occurred when two APCs fired on one another when their view was obscured. The operation was the largest paramilitary operation in British Columbia history and cost $5.5 million.

It's hard not to sympathize with the Wet'suwet'en when you see the state overplay its hand. Whether it's Coastal Gaslink (provincial NDP, LNG lobby) or the Trans-Mountain pipeline (federal Liberals, Alberta PCs, bitumen lobby) our First Nations are doing the heavy lifting and a good many of the rest of us are deeply grateful for their resistance. The Petro-State is not going to go quietly into the night. Imagine a government that declares a climate emergency one day and the very next day greenlighted a massive bitumen pipeline that it had stupidly purchased in our name.

Non-violent civil disobedience is the order of the day. I expect the Coastal Gaslink protests are just a pre-cursor to the resistance that will be sparked by Trudeau's Folly as the pseudo-green Dauphin drives his ridiculous pipeline to "tidewater."

It's like the "death of a thousand cuts." With each insult I feel more British Columbian and commensurately less Canadian. It's not the Wet'suwet'en who are undermining national unity. No, that's the handiwork of people like Trudeau and Kenney.

It's not the Wet'suwet'en who are undermining national unity. No, that's the handiwork of people like Trudeau and Kenney.

Agreed but lets not stop the blame game there!
The National Post is hedging it bet's and readership on the topic of separation as do Roy Green and Adler on syndicated radio.
Your own remarks, Mound, add nothing but discontent to the conversation!
Let's talk solutions for at the end of the day all separatists when faced with the ultimate decision have to do so.
Like it or not solutions will require compromise not capitulation.

.. Re the Gustafsen Lake military operation, I was unaware of the detonation as the fuse igniting the firefight.. and the 77 thousand rounds or what calibre. Must update - thanks ! Trying to imagine rate of fire or some sort of rational explanation to expend 77,000 rounds ? Hell, I doubt they came anywhere near that volume of fire during the firefight that Khadr somehow survived.

.. re feelings on being a British Columbian lessening your feelings on being Canadian, I would interpret much differently. And I say that in regard to various other Provinces and Territories that may be feeling this as well. In my view or opinion.. perception. BC is poised perfectly in a needed Canadian leadership position.. but John Horgan is suddenly in the way, part of a stunning needless problem when Canada requires solutions. Quite shocking & disturbing.. but it seems the current NDP Political Party is now undermining that opportunity. Its astonishing actually.. but I should know by now that 'the political Brand' can be meaningless. My advice for Horgan is to grow a pair and just drop the NDP camouflage.. its looking ridiculous at this point, quite resembling the previous sellout and pretend 'Liberals' under Campbell, Christy & Coleman Inc. If what Horgan is now doing re LNG and has done re SIte C is compounded by rolling over on Bitumen, trashing the marine ecologies and The Salish Sea.. he needs to go. Just go.

Canada needs a strong and unique BC, Alberta especially is in truly deep trouble and worse is yet to come. Its triage time politically, and that province seems bent on self destructing. Saskatchewan and Manitoba ? Just less twisted .. perhaps. Ontario and Quebec seem dazed and confused.. redeemable ? I think so, 'could be maybe'. Maritimes ? Hanging tough as Maritimers always do, even as Alberta under Kenney Inc is a complete disaster area politically. Alberta is toxified ethically by Big Energy and captured Federal Governments of Harper and now Trudeau. Newfoundland & Labrador are a breed apart, that just keeps on keepin on. So it seems its the centre of Canada from Alberta to Quebec is the weakest, dazed and confused in Confederation.. its the two coasts that need to help the center find its troubled way out of self induced harms way ie out of the disaster of neoliberalism and greed.. and corrupt political parties


As I wrote the other day, a variety of players are each trying to set the narrative of this dispute. Partly that's because it engages a number of interests that, even as they divide into camps, comprise more or less overlapping positions. There are ethnic lines, political lines, generational lines, corporate and economic lines.

The hereditary chiefs of the Wet'suwet'en are not opposed to development. Their productive cooperation in forestry is a prime example. They want their sovereignty acknowledged and not just in empty platitudes. They're not interested in the standard "take it or leave it" ultimata. Why should they be?

Unfortunately when these disputes arise they rekindle the embers of past, unresolved First Nations issues. The Mohawks a prime example.

The fact is that we have been brutally heavy-handed in the past right up to this fiasco. 77,000 rounds fired by government skirmishers at Gustafsen Lake. The weight of the empty brass alone would destroy trust.

We are at a time of upheaval and transition. These things are rarely placid. The petro-state will either end or we shall end.

I was a bit surprised when I came across the most balanced report on this today in The New Republic. It's worth a read, even if it is American.

In this country secessionists have the luxury of continuing to be Canadians if they're successful in starting up their own brand new country. saint René and Parizeau understood this. The sentiment thrives in an atmosphere where citizens have learned that there can be advantages in simply being different or in belonging to a group that makes them distinct from most of the rest. Of course, I'm not saying there's anything wrong with that.

Sal, the modern history of British Columbia is a tale of weak, dumb or corrupt leadership. I came here in the 70s and have never known an election in which people voted positively 'for' something instead of 'against' the party or leader they rejected.

The province was governed a lot like the notorious Vancouver Stock Exchange in its day, the era of Murray Pezim et al. It was all loosey-goosey. The last hurrah of the Yukin gold rush.

Bill Bennett who might vanish for days on end in the company of a bottle. Van der Zalm. Glenn Clark, the artful dodger. Christy Clark, queen of the grifters. And now Horgan, BC's very own Janus. There was a parasitic streak that ran through that gang of reprobates. SoCreds, conservatives with Liberal branding, and New Dems who get elected when we just can't stomach another Liberal government.

I sense that politics is failing for want of vision. Neoliberalism hands enough incidents of sovereign power to the private sector that it breeds politics who are technocrats, petit fonctionnaires. Administrators, not leaders. Vision? Where? Who offers Canada a vision that unites us? They pay lip service to national unity but, even then, it's invariably when they perceive a threat to confederation and it lasts until the peril passes.

It is no secret that climate change and the associated challenges that confront us as a global civilization, as nation states and as societies weigh heavily on my mind. It is going to take incredibly dynamic leadership to steer us through these dangerous waters. Social cohesion is the rudder that makes that possible. These bonds come together fairly quickly in crises such as wars. Then we put aside our differences "for the duration." Only the existential threats of our day are more akin to death by a thousand cuts - events that will be felt differently in different places at different times. Social cohesion will be just as critical but it will have to be established in advance. That takes vision.