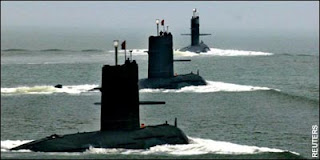 I'm telling you, you need to watch everything that's happening when you connect the dots in that region from Afghanistan to India, Russia, Pakistan and China. It's like watching something growing in a Petrie dish.

Remember Pakistan, Mr. Bush's most important ally in The War on Terror? Things have changed. A key factor was the Bush initiative to give nuclear science and assistance to Pakistan's main military rival - India. Then the Wall Street meltdown shockwave apparently hit Islamabad's markets and things went critical.

So where does Pakistan's president Zardari go when he needs a measly $6-billion to salvage his own economy? Why, to China of course. He goes for a four day visit. And what else does the Prez come home with? Nothing less than a nuclear technology transfer deal with the Chinese.

Now it's not the sort of comprehensive nuclear gift basket that India just received from the U.S., not openly. Rather it's a piecemeal sort of agreement, at least what's being presented for public consumption. CBS News, however, got this:

A senior Pakistani government official, familiar with discussions between Zardari and Chinese officials, claimed Thursday that China had agreed to “consider further nuclear power reactors to fulfill our needs. The relationship (on the nuclear issue) remains intact”. Speaking to CBS News on condition of anonymity, the official added, “there is now a complete understanding on our future cooperation”.

Oh great. Now we're creating bi-polar proxies again, only this time we might just be giving them advanced technology critical to their nuclear arsenals. Say that to yourself three times. This is probably a good time to learn a bit about the theory of the use of nuclear weapons. An exchange of weapons over there could trigger an irresistable spread within hours. And that would be that. So can somebody remind me why we're just going along with this, even increasing the possibility of this turning the lights off?

And that, ladies and gents, is exactly what's starting to happen there.

Here are a few of the cards that have already been dealt:

America's global economic domination appears to be winding down. It's being gradually squeezed by ascending economic superpowers including China and India and, to a lesser degree, Russia and Brazil.

America sees its key rival as China which is also America's biggest creditor. America and other nations have outsourced a great deal of their manufacturing capability to China which has given the Chinese the needed spark of stimulus to make huge leaps in education, technology and, yes, military expansion. China now produces its own rockets, jet fighters and nuke submarines and they're said to be surprisingly good.

There now exists an intense, although understated, rivalry between the United States and China for global resources with particular focus on the Middle East and Africa. India, too, must compete for resources, especially oil.

China has become dependent on Middle Eastern oil. That gets shipped to China via tankers. The Chinese bound oil tankers ply sea lanes that pass right by India.

India is furiously expanding its "blue water" navy. It's adding a new generation of its own submarines as well as new surface vessels including aircraft carriers. The Indian Navy has already proclaimed its intention to secure the oceans east of India to the Russia's Kamchatka peninsula. That blankets China's entire seacoast, all of it.

The United States appears to have drawn India into its camp to aid in the containment of China. India and China are, after all, natural rivals who have clashed before.

The India-US nuclear deal increases the insecurity of China's tanker access to Middle Eastern oil and, for that matter, its access to just about every other resource. It also has sparked consternation and genuine insecurity in Islamabad.

China, too, is embarking on an enormous rearmament campaign. So, too, is Russia. China, in particular, is focusing on its own "blue water" navy, one that will contest the same oceans and sea lanes that the Indians have said they will control.

The capability of China's subs was demonstrated about a year ago when one of its new boats popped up in the middle of a US Navy carrier battle group, just five miles from the carrier. Until they eyeballed it the American ships had no idea it was there. Popping to the surface was tantamount to saying, "Bang, you're all dead." That was much more than a stunt

China knows that it can't risk relying on its new navy to keep open its access to Middle East oil. Hence it's looking for overland routes and those pipelines would have to flow through Pakistan and, in particular, the Balochistan territory in the south.

The Americans, too, are eyeballing pipeline routes through this region that would bring oil and gas resources across Afghanistan into Pakistan and then on to India or south through Balochistan to the Arabian Sea and onward to the Good Guys

Pakistan is the perfect blocker to thwart Western and Indian access to these oil and gas reserves and divert them, instead, to China.

Pakistan, and Iran with which it shares a border, are both seeking membership in the Shanghai Cooperation Organization, SCO, which is, among other things, a military mutual defence alliance and now includes China, Russia and Khazakstan.

Are you beginning to get the picture? The world has been plunged into a state of flux geopolitically, economically and militarily. Some nations are on the way up, some nations are ebbing a bit. This creates a great deal of insecurity, suspicion and, to some degree, anger.

You know, we should be in high dudgeon over the ludicrous plunge into this. We're sitting by as the United States, by its nuclear suppport of India, is allowing the Chinese to cut an offsetting deal with the Pakistanis. If we can't stop this at our end, there's not a chance in Hell we'd be able to get the other side to back down. And, if we don't stop this in time, what do you end up with? A brand new, vastly more unstable and dangereous, Cold War.

This isn't wild speculation or fantasy. It's about the only coherent narrative you can extract from these circumstances. We have to start to think about just what is going on, where these things are headed.

Keep in mind how the Soviet Union and its superpower days came to an end. America drove it to financial ruin (thanks to a handy collapse in world oil prices when the Sovs most needed that revenue). It didn't end in a shooting war. It ended with the collapse of the Soviet economy that also brought the collapse of its military apparatus.

Now it's America that's economically vulnerable and China that is poised to exploit that weakness, wherever it can, while the window of opportunity remains open. American diplomacy during the Bush years has been an utter catastrophe, a succession of blunders that were never foreseen by an administration blinded by an insane ideology and hubris.

Wheels spinning within wheels. You may just be getting your first glimpse at the new Cold War.