Pakistan - the Fuze in the Powder Keg 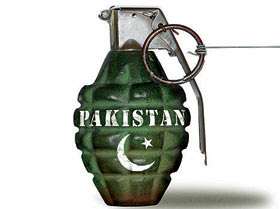 This is a glass half full sort of story, the kind you don't see on this blog very often. Here's the premise - maybe a South Asian Cold War wouldn't be all that bad.

Pakistan is in a shambles. It needs a big power patron to get it through the tough times it's now in. The US has already gone with India and has now fallen into its own economic abyss. Maybe we'd all be better off if China stepped in.

Just how bad are things in Pakistan today? That's pretty much answered in today's Guardian:

...A special session of parliament called by the government to forge a political consensus on the "war on terror" has backfired spectacularly as parties, including some in the ruling coalition, denounced the alliance with Washington and Nato rather than backing the army to take on the Pakistani Taliban.

...Critics of the government, which is led by controversial president Asif Ali Zardari, complain that there is a paralysis of decision-making and policy. A leaked US top secret National Intelligence Estimate on Pakistan concludes that the country is "on the edge". A US official was quoted summing up the assessment as "no money, no energy, no government".

The economic nosedive will aid recruitment to extremist groups, experts fear, and force more poor families to send their children to the free madrassa schools, which offer an exclusively religious curriculum. Inflation is running at 25%, or up to 100% for many staple food items, and unemployment is growing, pushing millions more into poverty. The rupee has lost around 30% of its value so far this year.

"The canvas of terrorism is expanding by the minute," said Faisal Saleh Hayat, a former interior minister.

"It's not only ideological motivation. Put that together with economic deprivation and you have a ready-made force of Taliban, al-Qaida, whatever you want to call them. You will see suicide bombers churned out by the hundred," he said.

"The majority of the people of Pakistan do not see it as our war. We are fighting for somebody else and we are suffering because of that," said Tariq Azim, a former minister in the previous government of Pervez Musharraf, whose party now sits in the opposition. "At the moment the only ones toeing the line are the People's party."

Members of parliament are particularly angered by recent signals from Washington that it is prepared to talk to the Afghan Taliban, while telling Pakistan that it must fight its Taliban menace. "They [the US] are showing a lot more flexibility on their side of the border," said Khurram Dastagir, a member of parliament for Sharif's party. "The US are trying to externalise their failure in Afghanistan by dumping it on us."

The rising spread of anti-American and anti-NATO anger among the Pakistani people and their leaders is bloody awful for those of us with troops stuck in next door Afghanistan. It seems that the more we push Pakistan, the worse our position becomes.

So, it's becoming painfully clear that we really can't deal with Pakistan and we'd be fools to keep repeating the same mistakes. Maybe we'd all be better off with Pakistan stabilized under Chinese hegemony. At least we know we have some ability to deal with the Chinese.

Don't get angry about this, it's our own damned fault. Back in the days of Bush I, we came to treat the end of the Cold War as the end of our problems. We refused to see the obvious, that the decline of Soviet hegemony would actually make the world a more dangerous place, spawning a whole nest of failed and rogue states.

There was an enormous opportunity to create a Marshall Plan for the most critical Third World states to stabilize them politically and economically but it was a window of opportunity that we neglected. If you don't understand that, look at Afghanistan. There was an enormous opportunity but no one was in the mood to commit the vast resources it would have taken to promote such an initiative, and so we let too much slide and we're paying for that today.

Maybe a return to Cold War hegemony wouldn't be entirely bad. For starters, it's already underway, it's happening whether we like it or not. Powerful nations inevitably seek to establish spheres of influence in their neighbouring states. We take ours for granted but imagine what Washington would do if it found Russian weaponry deployed along the Rio Grande?

As China borders both Afghanistan and Pakistan it has an inevitable vested interest in the spread of its sphere of influence into these countries. Likewise Russia has a strategic interest in maintaining its sphere of influence in the Cacasus and Eastern Europe. That doesn't mean subjugation as much as co-operation and doing what's necessary to achieve stability in these regions.

Maybe it's time we stopped running around trying to poke rivals in the eye with a sharp stick. It might be time to work with the Chinese to see if they can accomplish in Pakistan what we can't achieve. That might mean handing over a hunk of geo-political interest but that much seems inevitable in any case so perhaps we ought to see what we can get for it through negotiation first.
Posted by The Mound of Sound at 10:13 AM