Good for the Soul - Another Republican Falls to Hate-Based Blowback 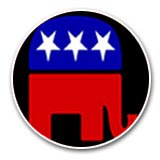 The Republicans have been in power in too many places for far too long. It's made them say the most stupid, hateful things and they're starting to pay the price for it.

In keeping with the theme underlying the McCain-Palin campaign, North Carolina congressman Robin Hayes sought to warm up the crowd for a McCain campaign rally with this zinger:

"Liberals hate real Americans that work and accomplish and achieve and believe in God."

Hayes later denied he'd said any such thing - until the tapes came out. When he shot himself in the foot, the incumbent Republican was five points ahead of his Democratic rival. Oopsie! Hayes Democratic opponent now leads 51-46.
Posted by The Mound of Sound at 12:42 PM

Email ThisBlogThis!Share to TwitterShare to FacebookShare to Pinterest
Labels: Republicans, US election