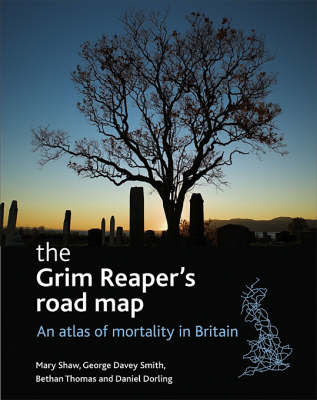 Coming to Britain tomorrow, can we be far behind? The Guardian reports that tomorrow will be the unveiling of a mortality atlas of Britain.

Worried Brits will be able to pore over maps of various maladies and mishaps that reveal where you're most likely to be murdered or in which region you stand the greatest chance of cervical cancer. The possibilities are - endless?

The working title is The Grim Reaper's Road Map, An Atlas of Mortality in Britain.

The maps, to be published tomorrow by Policy Press, show patterns that are very different to those created in previous attempts to understand the spread of death across the country. 'Most maps of mortality simply show that more people die in those towns and cities where more people live, particularly in the places where there are lots of elderly people,' said co-author Danny Dorling, professor of human geography at the University of Sheffield. 'But our maps show a person's chances of dying from a particular cause in a particular place, compared to the national average chance for that cause of death, having standardised for distributions of population and by age and sex in each area.'
The maps show deaths from a range of causes, including heart attack, cancer, murder, electrocution and deaths during surgery.

The maps also reveal clusters of more unusual deaths. Most people who die by choking on food live in Morpeth and St Albans East.
Posted by The Mound of Sound at 8:13 AM