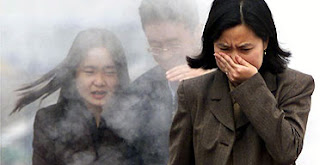 Beijing has named China's price for getting serious about greenhouse gas emissions. It wants the "developed nations" to allocate 1% of their GDP to a fund to help poor nations fight global warming. China is also demanding that the industrialized nations commit to a transfer of green technology to less advanced states, presumably including China.

China's "you first" gambit doesn't come as a huge surprise. They've been arguing all along it was up to the industrialized nations to commit to cutting carbon emissions before expecting the developing nations (i.e. China and India) to follow suit.

The Chinese announcement is pretty specific on what it wants from the Western world but it's also extremely vague on what China will commit to do in exchange and how it will deliver on any promises it may make.

From the lead toy scandal to the melamine-tainted food scandal, the world has seen that Beijing doesn't have its own house in order. How does the central government think it can enforce its promises to cut carbon emissions?

When it comes to China, there's a huge and well-deserved confidence issue. It'll be interesting to see how the Chinese attempt to overcome that hurdle.