The Only Way Out of Afghanistan 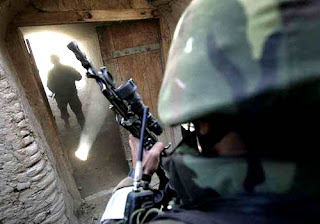 Is a national army viable in a country that is riven with tribalism?

Rivalries are endemic in tribalism. Afghanistan has five main tribes - the Pashtun (including Balochs), Uzbek, Tajik, Turkmen and Hazara along with a smattering of Kurds and a few others. They represent a diverse patchwork of ethnicities - Persian, Oriental, South Asian - vestiges of centuries of war and conquest. The tribes, in turn, are organized around the authority of warlords who, during the Soviet and Taliban eras, operated some pretty powerful militias. These are people and leaders steeped in civil strife and armed conflict.

How can a national army be any more viable than the national government it serves? History shows it can't and history also shows that, in the absence of a viable national government, some militaries have stepped into that power vacuum to take control themselves. South Vietnam, Pakistan, Central and South America, the list goes on.

In Afghanistan, we're counting on the creation of a sufficiently large, adequately trained, effective Afghan National Army as our way out of that place. That is our only exit strategy.

So just how is the ANA doing seven years after the Taliban was sent packing? NATO commanders say when they get the Afghan army in the field, they're not bad at all. Beyond that, we don't hear much about the ANA.

In the early years, the Afghan National Army was plagued with high desertion rates. No one knows what the desertion situation is now because that information is no longer given out. A story in yesterday's Toronto Star pointed out that the Taliban are now using bribery to fuel desertion and undermine the Afghan army. "...U.S. and Canadian mentors complain privately about the slovenly appearance and lack of discipline among soldiers in the Afghan army. There are also complaints about petty theft, mistreatment and infiltration of the army by Taliban spies."

An immediate concern is the state of the central government in Kabul. Despite the assistance provided by NATO and the US military, Hamid Karzai has been a dismal failure at extending the government's control much beyond the capital. That creates power vacuums throughout the countryside that, as expected, are being filled by various ne'er-do-wells. Forget the Taliban, how is the central government going to dislodge these other rivals?

Even the wardrum-beating National Post has finally caught on to the state of affairs in Kandahar. Yesterday the paper reported that the Taliban have established a parallel government that operates pretty much throughout Kandahar as they please.

It's always been my view that nothing we did in Afghanistan could make any real difference unless and until there was a viable central government in Kabul. A country needs a backbone and, in this case, it's struggling without one. Training an army is a great idea - if it has an effective government to serve. What if it doesn't? With the insurgency growing and new groups joining in with the Taliban, I don't think we're going to have to wait too long to see how long the Afghan army can function in a political vacuum.
Posted by The Mound of Sound at 8:28 AM

Your stuff is so good sometimes I feel like I'm getting smarter just reading it.

Well, Todd, many thanks for that. Don't forget this stuff is largely opinion and speculation, just my attempt to make some sense out of confusion by stringing together a few facts.