An Idea Whose Time has Come? 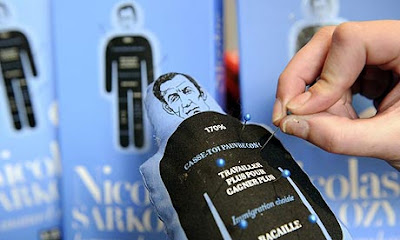 Trust the French. They've come up with an idea to vent frustrations over their country's rightwing demagogue, Nick Sarkozy. It's a voodoo doll. From The Guardian:

A Nicolas Sarkozy voodoo doll that became a bestselling cult classic when the president tried to have it banned is to remain on sale after a French court threw out the case today.

A judge ruled that Nicolas Sarkozy: The Voodoo Manual, which features a doll, a set of pins and a book explaining how to put the evil eye on the president, fell within the boundaries of "free expression" and the "right to humour".

With recession staring Canadians in the face there might soon be a lot more of us looking to fill some time. Wouldn't a Stevie doll be just the thing?
Posted by The Mound of Sound at 10:17 AM