Burning the Bridge to Nowhere 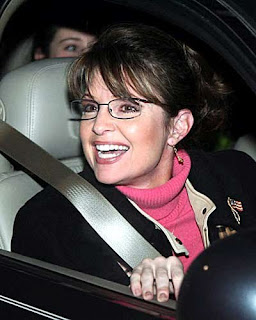 It could just be that no one has more at stake in the November 4th presidential election that Sarah Palin. If Obama wins, it's very much a lose-lose proposition for Ms. Palin, both in Washington and back home in Juneau.

The Anchorage Daily News reports that Palin's campaign blunders and excesses haven't gone down well at home and she faces a much different reality if she has to go back to the governor's mansion:

Palin has always attracted controversy, but she is now a far more polarizing figure, both in Alaska as well as nationally, than before her nomination. If she returns, the Republican governor will face former Democratic allies furious at her campaign attacks.

She will also face lawmakers from both parties ticked off at her handling of the so-called 'troopergate' investigation and her recent false assertions that the investigator's report cleared her, according to interviews with a number of lawmakers and others who watch Alaska politics.

"We've seen her do and say things that are shocking to us, so it's going to be different, to put it mildly," said Juneau Democratic Rep. Beth Kerttula, the House minority leader. "We have a whole different way of looking at her."
Posted by The Mound of Sound at 11:48 AM

She's no Condoleeza Rice, that's for sure.