The Wrong Guy to Rescue America? 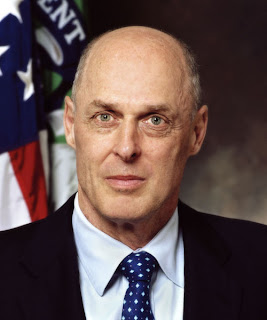 If, as has been widely claimed, the real Achilles' Heel to the global financial meltdown, lies in $60-trillion dollars of bogus Credit Default Swaps dumped into the markets by American financial giants, how wise is it to rely on the recent head of one of those very companies to rescue America from this very curse?

Just read the Wikipedia biography of Henry Paulson and you decide:

Paulson was Staff Assistant to the Assistant Secretary of Defense at The Pentagon from 1970 to 1972.[7] He then worked for the administration of U.S. President Richard Nixon, serving as assistant to John Ehrlichman from 1972 to 1973.

He joined Goldman Sachs in 1974, working in the firm's Chicago office for Manmeet Taneja. He became a partner in 1982. From 1983 until 1988, Paulson led the Investment Banking group for the Midwest Region, and became managing partner of the Chicago office in 1988. From 1990 to November 1994, he was co-head of Investment Banking, then, Chief Operating Officer from December 1994 to June 1998;[8] eventually succeeding Jon Corzine (now Governor of New Jersey) as its chief executive. His compensation package, according to reports, was US$37 million in 2005, and US$16.4 million projected for 2006.[9] His net worth has been estimated at over US$700 million.[9] Paulson has personally built close relations with China during his career. In July 2008 it was reported by The Daily Telegraph that: "Treasury Secretary Hank Paulson has intimate relations with the Chinese elite, dating from his days at Goldman Sachs when he visited the country more than 70 times."[10]

[edit] Tenure at and later relationship with Goldman Sachs

In 2004, at the request of the major Wall Street investment houses, including Goldman Sachs, then headed by Paulson, the U.S. Securities and Exchange Commission agreed unanimously to release the major investment houses from the net capital rule, the requirement that their brokerages hold reserve capital that limited their leverage and risk exposure. The complaint that was put forth by the investment banks was of increasingly onerous regulatory requirements -- in this case, not U.S. regulator oversight, but European Union regulation of the foreign operations of US investment groups. In the immediate lead-up to the decision, EU regulators also acceded to US pressure, and agreed not to scrutinize foreign firms' reserve holdings if the SEC agreed to do so instead. The 1999 Gramm-Leach-Bliley Act, however, put the parent holding company of each of the big American brokerages beyond SEC oversight. In order for the agreement to go ahead, the investment banks lobbied for a decision that would allow "voluntary" inspection of their parent and subsidiary holdings by the SEC.

During this repeal of the net capital rule, SEC Chairman William H. Donaldson agreed to the establishment of a risk management office that would monitor signs of future problems. This office was eventually dismantled by Chairman Christopher Cox, after discussions with Paulson. According to the New York Times, "While other financial regulatory agencies criticized a blueprint by Mr. Paulson, the [new] Treasury secretary, that proposed to reduce their stature — and that of the S.E.C. — Mr. Cox did not challenge the plan, leaving it to three former Democratic and Republican commission chairmen to complain that the blueprint would neuter the agency."[11]

In late September 2008, Chairman Cox and the other Commissioners agreed to end the 2004 program of voluntary regulation.

I don't know but it sure sounds to me as though Paulson was one of the key players who were gaming the American economy with these toxic, Credit Default Swaps, that created the Wall Street house of cards that now lies flattened.
Posted by The Mound of Sound at 10:06 AM