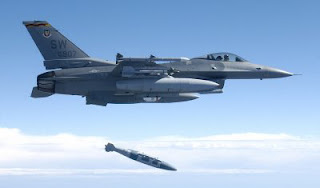 More dead Afghans - women and children - taken out by an allied airstrike. The good news - this time it's only 18, maybe nine more buried under the rubble. From BBC News:

"A BBC reporter in the provincial capital Lashkar Gah saw the bodies - three women and the rest children - ranging in age from six months to 15.
The families brought the bodies from their village in the Nad Ali district, where they say the air strike occurred.

A further nine bodies are said to be trapped under destroyed buildings.
Nato-led forces say they are investigating the incident in an area where the British military are known to operate."

What is wrong with us? This plays straight into the Taliban's hands. It's the perfect way for us to lose the "hearts and minds" struggle of a guerrilla war.

And don't give me any of that garbage about these deaths being accidental. There's nothing accidental about them. We know that massive civilian deaths are inevitable when we rely on aerial bombs to make up for our deliberate choice not to field even a fraction of the number of troops this war demands. We know these civilian deaths are the logical consequence of our dependency on airstrikes and so there can be no argument that, in calling in these airstrikes, we are morally and legally intending to cause these deaths.

I wasn't going to get into this today but I've changed my mind. Here's an enlightening perspective from Seumas Milne in today's Guardian:

...The British commander Brigadier Mark Carleton-Smith was last week even blunter. "We're not going to win this war," he said, adding that if the Taliban were prepared to "talk about a political settlement", that was "precisely the sort of progress that concludes insurgencies like this". The double-barrelled duo were duly slapped down by US defence secretary Robert Gates for defeatism. But even Gates now publicly backs talks with the Taliban, which are in fact already taking place under Saudi sponsorship.

This is the conflict western politicians and media continue to urge their reluctant populations to support as a war for civilisation. In reality, it is a war of barbarity, whose contempt for the value of Afghan life has fuelled the very resistance that western military and political leaders are now unable to contain.

In this year alone, for every occupation soldier killed, at least three Afghan civilians have died at the hands of occupation forces. They include the 95 people, 60 of them children, killed by a US air assault in Azizabad in August; the 47 wedding guests dismembered by US bombardment in Nangarhar in July - US forces have a particular habit of attacking weddings; and the four women and children killed in a British rocket barrage six weeks ago in Sangin.

...over the past year civilian deaths at the hands of Nato forces have tripled, despite changes in rules of engagement.
But most telling is the political and military calculation that underlies the Afghan civilian bloodletting. "Close air support" bomb attacks called in by ground forces - which rose from 176 in 2005 to 2,926 in 2007 and are now the US tactic of choice - are between four and 10 times as deadly for Afghan civilians as ground attacks, the figures show, and air strikes now account for 80% of those killed by the occupation forces.

But while 242 US and Nato ground troops have died in the war with the Taliban this year, not a single pilot has been killed in action. The trade-off could not be clearer. With troops thin on the ground and the US military up to their necks in Iraq and elsewhere, US and Nato reliance on air attacks minimises their own casualties while guaranteeing that Afghan civilians will die in far larger numbers.

It is that equation that makes a nonsense of US and British claims that their civilian victims are accidental "collateral damage", while the Taliban's use of roadside bombs, suicide attacks and classic guerrilla operations from civilian areas are a sign of their moral depravity. In real life, the escalating civilian death toll is not a mistake, but the result of a clear decision to put the lives of occupation troops before civilians; westerners before Afghans.

Dependence on air power is also a reflection of US imperial overstretch and the reluctance of Nato states to put more boots on the ground. But however much the nominal Afghan president Hamid Karzai rails against Nato's recklessness with Afghan blood, the indiscriminate air war carries on regardless. Given that the US government spent 10 times more on every sea otter affected by the Exxon Valdez oil spill than it does in "condolence payments" to Afghans for the killing of a family member, perhaps that shouldn't come as a surprise.

But nor should it be that the occupation's cruelty is a recruiting sergeant for the Taliban. As Aga Lalai, who lost both grandparents, his wife, father, three brothers and four sisters in a US bombing in Helmand last summer, put it: "So long as there is just one 40-day-old boy remaining alive, Afghans will fight against the people who do this to us."

There's nothing left that's noble in our war in Afghanistan. There is nothing noble in butchering Afghan civilians in order that we can wage "war on the cheap." It's no wonder the Taliban are resurgent, no surprise that they're now closing in on Kabul. We just keep recruiting more and more insurgents with every civilian we slaughter.

But this war isn't going to end anytime soon. NATO states might just drift away but American forces aren't leaving. I recently wrote about the Baloch insurrection in southern Pakistan and America's strategic and energy interests there. That said, there's no reason at all, none whatsoever, to continue soldiering on in Afghanistan as America's Foreign Legion either.
Posted by The Mound of Sound at 12:02 PM

Yeah, it's a wrenchingly bad situation.

I opposed the Iraq War, but I thought it was fine to go into Afghanistan and hunt down Bin Laden. However, I assumed they'd go in and actually, you know, hunt down Bin Laden. Years and many deaths later, I just gotta shake my head and wonder how we can fix this up with as little further damage as possible. I don't know what the answer is.